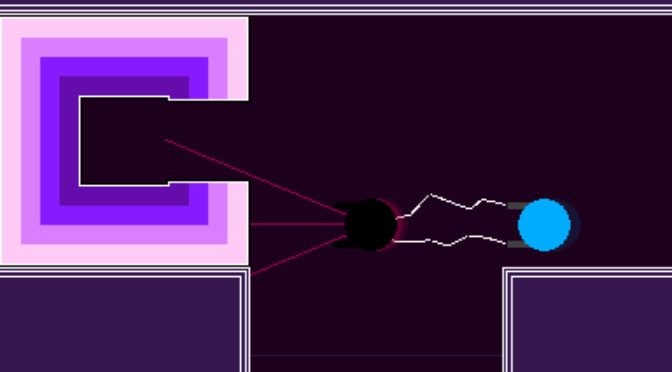 I said I would be back with a normal Time Waster and here I am! Not to be deterred from last week, I ended up finding a browser game to waste some time with this time around. It’s a simple game that goes by the name Voltage.

Voltage is a game that features 10 levels for the player to progress through. Nine of these levels have the player sneaking around to reach and end goal, while the last one is a boss battle. The hero of our game is… a blue ball that shoots electricity?

The first nine levels of Voltage includes a variety of different enemy types. These enemies range from those that are just like our hero, but red, invincible patrols and mounted turrets. There are also suicide electrical balls, but they only appear a couple of times.

The gameplay of Voltage reminds me a lot of Metal Gear. No, not Metal Gear Solid. I mean the OG Metal Gear on the MSX. I’ve already said that there’s lots of sneaking in the game and defeating enemies isn’t the main focus. That already gives me those Metal Gear vibes. However, the movement also reminds me of the sneaking classic, but not for the best reasons. That’s because players can’t turn in place, but instead have to move in one direction and then turn back to face the right way. It’s a bit cumbersome and kind of gets in the way of the rest of the game.

Shooting in Voltage is also a bit annoying. The player has to make sure they are facing the right direction to fire, and that’s a bit of a pain with the movement system. Plus, they have to hold still for a couple of seconds while shooting the electricity. It slows down what is already slow gameplay and leaves the player open to attack from other enemies. I wouldn’t worry so much about it, but the enemies have somewhat random patrol patterns that can be hard to predict.

As far as that final boss fight of Voltage goes, it really isn’t anything all that challenging. It’s just the player going after a couple of stationary eyes that shoot lasers. The eyes each have a targeting line that makes the lasers easy to dodge. Also, they never aim at the player at the same time. It’s a boss fight in name only, really.

Moving on from the gameplay, let’s talk about the graphics. Voltage uses a minimalist style that is common among indie games. I don’t fault developers for using it. Getting gameplay ideas our there is more important to me. However, Voltage is so minimalist that it appears lazy. Like I already said earlier in this review, I’m not even sure what the hero, or some of the enemies, are suppose to be.

The audio in Voltage isn’t bad. There’s some underlying music playing throughout the game that almost gives it a creepy vibe. This goes well with the sneaking aspect of the game. Sound effects are also alright, but nothing really important. I do however, enjoy the garbled computer sounds that represent the boss’ voice.

Overall, Voltage isn’t really worth wasting your time on. It’s a bit too simple and clunky to really be worth checking out. Maybe if you are really starved for a Time Waster you can give it a look, but it really isn’t anything all that worthwhile, even with its incredibly short length.

Voltage earns 2 GiN Gems out of 5!