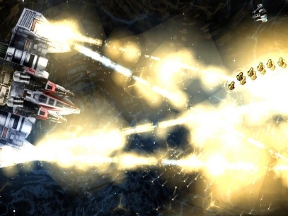 Use Your Tunes To Conquer The Universe

So this past week I was browsing around Steam when I ran across a game titled Beat Hazard. It’s an arcade shooter that uses your music to power the game. Seemed like an interesting enough idea so I figured "Why not?" and picked it up.

And I’ve got to say it wasn’t a disappointment.

As I mentioned before, the game uses music to power it. What I mean by this is that the various rhythms and beats within a song have a major effect on what happens in game. Sure Beat Hazard has the typical top down arcade shooter gameplay, but when you weapons power is based on the intensity of the music that you are listening to, it can make the game a bit of a challenge. Sure, the guitar solo left you with amazing firepower and enemies were devastated by the flurry of flashing death. But when you hit the quiet break before the second verse found in some metal song, you can find yourself being easily overrun by the immense amount of enemy ships that spawned in.

One small complaint is that there are around three or four different enemy ships and only a couple of bosses in game. The lack of variety hurts Beat Hazard but not enough to do any major damage.

This does leave the game with a unique feel where knowing your music really helps in battle. You can handle random songs easily enough but the moment to shine is while playing some of your favorite tracks. It’s about like being able to select what difficulty to play on just by what song is played and as with all games where music plays a major part "Through the Fire and the Flames" by Dragon Force is a challenging nemesis.

What really makes Beat hazard stand out though is the visuals in the game. The flurry of weapons fire and explosions of death light the screen up with spectacular flashes of color and light. The base effect is 100 percent, but if you are really feeling lucky then turn the effect up 200% and feel your eyes melt out of your face. Okay maybe it isn’t that bad but after an hour of play I had to quit due to one heck of a headache. Luckily there isn’t anything forcing you to play with the visuals all the way up and I sometimes even go as far as turning them down to 75 percent.

When it comes down to the audio of the game, then it’s only as enjoyable as what you make it. After all with your own library of music in the game it’s hard to really mess up the audio. If listening to your music just doesn’t quite cut it though, the game does have the ability to hook up to internet radio and generate baddies that way as well.

Overall Beat Hazard is a great way to waste some time and doesn’t hit the wallet too hard either with a price of $10. The gameplay will leave you satisfied, the visuals stunned, and the music will blow you away in this great indie game.

Beat Hazard blast its way to 4 GiN Gems out of 5!