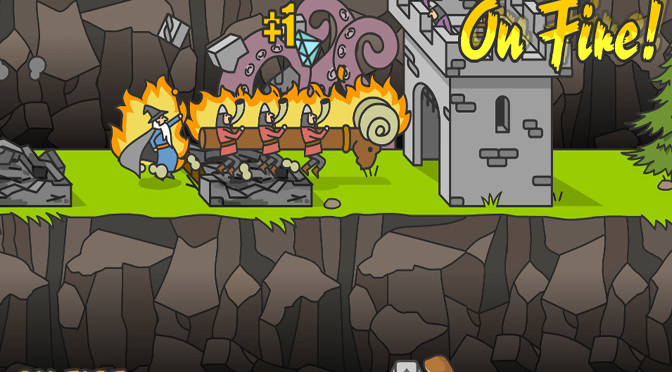 This week I decided to get my time waster fix from my internet browser. This led to me scouring the internet in search of something to play. What I found was Ram Time!

Ram Time! is a side-scrolling game that has the player controlling three knights and a wizard as they carry a ram through castle, houses and anything else that gets in the way. The main point of the game is to destroy as much as possible to gain a high score without getting killed.

Players can level up their ram team by smashing into houses to gain experience. Leveling up allows the payer to increase their agility, endurance, magic and luck. However, they also need to keep an eye on their health, which lowers for every structure destroyed.  Health can be gained by killing various animals an eating the meat dropped by them.

There are also other features in Ram Time! to assist the player with their destruction. That wizard I mentioned earlier can use a lightning spell to destroy everything on the screen. This is great for getting rid of building while being low on health and looking for food. There are also portals in the game that recharge the player’s health and magic bars when ran through. The player can also build up combos to catch on fire. This makes them invincible for a limited amount of time.

All of these elements come together to give Ram Time! some interesting gameplay. It makes it so that players can’t get too destruction happy without dying early on and actually causes them to plan out their moves in order to pick up bonuses and keep going.

One problem I had with Ram Time! is how short it is. Without a real end goal, it becomes easy to just play through the game once or twice and be done with it. I think a great way to extend the amount of time spent on the game would be to include an upgrade system. This would give players more to work for and give all the jewels and money picked up in the game a higher purpose than just adding to the score.

The graphics in Ram Time! have a unique flair to them. The whole game looks more hand drawn than done in on a computer and all of the characters and environments are fairly simple. This work well for the game. Detailed objects would get lost in the mayhem of the game and go mostly unnoticed.

Another issue I have with Ram Time! is its audio. I think I can honestly say that not a single audio clip from this game is an original piece. When dying, leveling up or starting the game, players are treated to a voice clip from the 1980’s He-Man cartoon. The level music used for the game is Metroid and jumping and pausing sound effects come from the Mario games. There were other songs included in the game that I knew were familiar, but I just couldn’t place them.

Overall, I like the idea behind Ram Time! The game is fun and its graphics are simple but great. It’s definitely worth sitting down a playing for a few minutes, but I wouldn’t advise wasting too much time on the game. The ability to upgrade the characters and ram would add a lot to the game. Also, I’d really like to see it get some original audio.