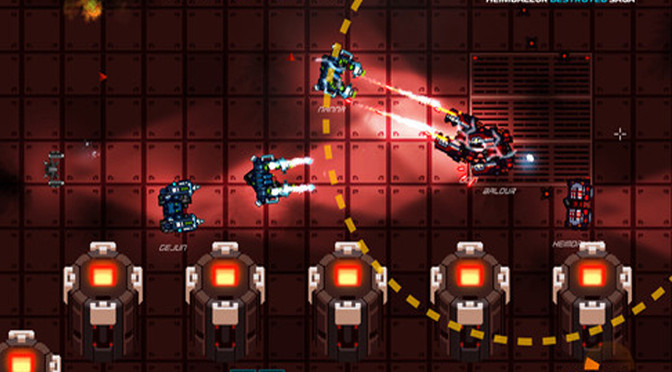 This week I’ve spent my time with Broken Bots. Remember when I said last week that I’ve been spending a lot more time on multiplayer games. Well,, that still holds true this week.

Broken Bots is another arena game that pits players against each other to see who is the best. Unlike DiscStorm last week, Broken Bots is all about teams coming together to overcome one another. It’s presented to players from a top-down perspective and there’s a lot of action on screen at any single moment.

Broken Bots features has a lot of different game modes available for players to get into. There’s Team Deathmatch, King of the Hill, Capture the flag and more. having all these different game modes means that players will be able to spend a fair bit of time with the game before they become bored of it.

Broken Bots also has one key difference that separates it from other multiplayer arena games. In the game, there are generators for each team. Players have the ability to bring energy to these generators to power them up. They can also choose to attack the opposing team’s generator. Doing so can overload it and cause it to send out a shockwave that causes the entire team to malfunction. Bringing energy to a generator helps prevent this.

The addition of the generator in Broken Bots is great. It makes it so that there’s a secondary objective to every match. For example, running around and killing other players is the way to win in a game of Team Deathmatch. However, if one or two players focus on the enemy generator, then the opposing team will suffer malfunctions that make them easier to kill.

I suppose I should talk about these different malfunctions. They change quite a bit and can really mess the player up. This includes sporadic weapon fire, inversing the targeting system and reversing movement. This is all one huge thorn in the player’s side. However, there is also the rare chance that a malfunction can cause the player’s robot to become more powerful. This includes increased movement speed and weapons turning into a spread shot that can deal massive damage to multiple enemies. Malfunctions can also occur when any single robot gets damaged too much.

Broken Bots also allows players to customize their robots fro battle. Players can choose between two different special abilities that they can bring into battle with them, such as healing or sending out a shockwave. There are also passives that can increase the robot’s damage, health regeneration and other stats. The ability to customize definitely helps players create a robot that suits their play style.

The graphics of Broken Bots are solid. Everything is 2D. It’s not pixel graphics and that’s just fine. I love pixels, but a game that doesn’t use them is refreshing every once in awhile. There’s a lot of effects for shots and abilities in the game that can make it a little hard for players to keep track of their bots, but it’s not too bad.

The audio in Broken Bots is really enjoyable. It has this techno feel to it that is reminiscent of Daft Punk. The electronic beats really fit well with a  game that is all about robots killing each other. Sound effects are solid as well, but hard to pick out during all the action. Honestly, I prefer to just pay attention to the music in this game.

Overall, I really enjoy Broken Bots. The game is still in Early Access on Steam, but it has a lot going for it. As is, it could survive a release, but I’m glad to see that the developers are willing to put more time into it before calling it finished. It’s always nice when a game has its kinks worked out first.

Broken Bots won’t be getting a final score due to its Early Access status. As such, I’ll be filling the score in with 2.5 GiN Gems out of 5 as a placeholder.