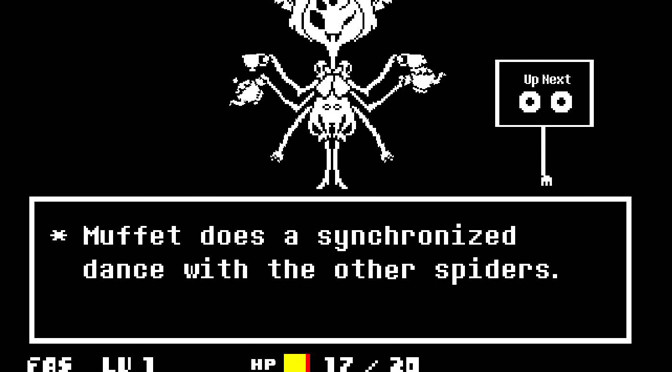 I finally got around to playing Undertale and let me just say “Wow!” I kept myself in the dark and managed to avoid spoilers until I got the chance to play the game for myself and I’m so overjoyed that I did.

Undertale is a story about a human young child that falls into the Underground. This is where monsters were sealed away after losing a huge war with humans many years ago. Players are asked to name their character and the gender of the child if left unsaid so that players can better imagine themselves as the child.

Undertale’s is an RPG, but it’s also not. It really just depends on how players approach the game. See, in this game players have the option of not fighting monsters. Doing this the entire game is called the True Pacifist Route. Instead of fighting, players will talk and interact with monsters in such a way that they lose the will to fight. Doing this allows the player to spare them and doesn’t reward any EXP or LVs. However, players can choose to fight and it takes them down a completely different route and makes the game play more like a traditional RPG.

No matter which route the player takes, every turn of combat in Undertale includes a small bullet hell section. These sections require the player to dodge attacks from the enemy to keep from being damaged. Some enemies can be hard to beat and every boss has a unique battle that will more than likely take few tries to get through.

One thing that is really cool about Undertale is how much time it gives to making all the monsters feel like real characters. The game is filled with funny characters like Sans and Papyrus, but it also has characters like Toriel, who may just be the most accurate depiction of a real mother figure in video games. Every enemy also has their own personality quirks that the player learns about in the pacifist route and it help makes the Underground feel like a living world.

I mentioned already that I won’t be talking about anymore spoilers, but I do have to mention that Undertale has three different endings. There’s the True Pacifist ending, a Neutral ending and the Genocide ending. Each of these endings completely changes the game and reveal so much lore about the world. The Neutral ending even has several different variations depending on what the player does during their playthrough. The True Pacifist ending is probably the hardest to get, but it’s worth it and can be done if the player has enough DETERMINATION.

Undertale is a little strange when it comes to visuals. The game definitely uses a retro graphics style, but it feels very unpolished. Despite this, there are a lot of details in the animation. This means that characters moving around the world don’t just seem like sprites 2-D. Battles also have their own unique flavor to them and there are lot of changing visuals to give players clues about upcoming attacks and such.

Undertale’s audio is absolutely amazing. If this were any other game I’d say its the best feature, but this game has so much going for it that I can’t actually say that. There’s just so much good and catchy music going around in this game that it’s hard not to like it. The music also does a great job at fitting the atmosphere the game is trying to present at different points throughout the story.

Here’s my personal favorite song from the Undertale soundtrack.

Overall, Undertale is one of the best games I’ve ever played. It interacts with players in such ways that I’ve never seen another game do and it really leaves an impact. It’s also got a wonderful soundtrack and unique visuals, but the part that truly stands out is the story. I implore everyone to play this game. Experiences like the one that Undertale offers don’t come around all too often and it would be a shame to miss out on it or have it spoiled.

Undertale earns 5 GiN Gems out of 5!