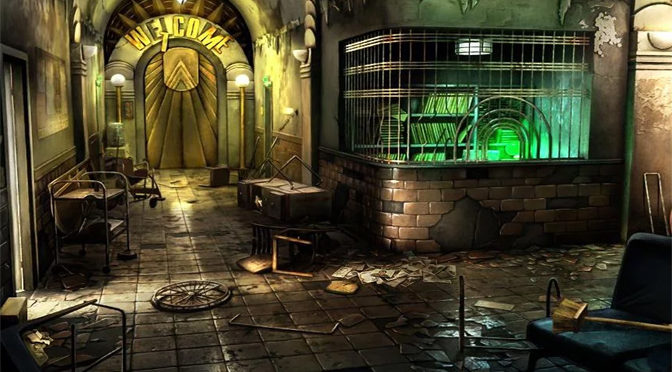 My adventures this week led me to a smartphone game called True Fear: Forsaken Souls I. Just like with last week, this is a case of the developers providing me with a key for the game.

True Fear: Forsaken Souls I is a hidden object game that has a story for horror fans. The game is all about a woman that receives a letter in the middle of the night. This letter appears to have come from her sister, which is kind of a big deal. See, the two haven’t seen each other since they were kids. There’s were some strange events concerning their mother and an asylum, but she can’t remember much else.

This starts the journey of our heroine to discover more about her sister and uncover the secret of their family. It leads her to an old, dilapidated house. It’s at this point that the game turns control over to the player and the search for hidden objects and solving puzzles can begin.

Unfortunately, this is also where True Fear: Forsaken Souls I starts to lose steam. One of the very first hidden objects that the player finds is a crowbar. You know, one of the most handy tools ever for breaking into just about anything. However, it really only works on two puzzles (one of which is just breaking some glass) before the main character just throws it away. Trying to use the crowbar on puzzles it wasn’t meant for will even result in the heroine saying something along the lines of “That could work, but there’s another way.” It’s annoying to have a game say what you are trying would work, but that it won’t let you do it that way.

I wish the crowbar was just one small complaint I have about how tools and objects are used in True Fear: Forsaken Souls I, but it’s not. There are so many instances where the player is given a tool, such as a hammer, and only ever uses it once. Then just a little later in the game a hammer will be needed again. Whelp, too bad. The other one just ceased existing after its puzzle was finished. Guess you’ll just have to go solve this other puzzle so that you can find this other hammer for the job.

There are other cases of this happening besides just these two I’ve talked about. It is a bit lazy when it comes to puzzle design and this can be seen in most of the puzzles in the game. There are often simple ways to solve puzzles with the tools on-hand. However, the game doesn’t allow this. It instead forces the player to jump through ridiculous loops to do it in a way that only the most overthinking of individuals would ever consider. It makes playing True Fear: Forsaken Souls I incredibly frustrating because of the lack of logic that goes into solving these puzzles.

Let’s talk about one more example of how True Fear: Forsaken Souls I complicates the most simple of tasks. One of the very first rooms that players will encounter in the game includes a TV that has a hammer stuck in the screen. The TV is on and it has electrified the hammer so that the player can’t pull it out. The simple man might just unplug the TV from the wall. Solves the electricity problem right? Nope. We’ll get the hammer later after solving several different puzzles in the house that will finally reward us with a pair of rubber gloves. All so we could pull this hammer from the TV because we threw the first one away after one use.

I have, of course, been talking about the puzzles in  True Fear: Forsaken Souls I this whole time, but I can’t forget that this is a hidden object game. Honestly, it does well as that. The environments look great and searching for the hidden objects is fun. It just isn’t the larger part of the game. I could nitpick about some minor details that don’t add up in the background, but I don’t really see that as necessary.

One of the surprising things about True Fear: Forsaken Souls I is the overall presentation. I know I said the environments stand out, but there are also cut scenes in the game. These use full 3D models and voice acting to tell the game’s story. Honestly, I was impressed by it. That’s a lot of effort to go through for a hidden object game. The voice acting is good and the characters look alright. The main negative I have to mention is stiff faces that don’t show much emotion.

It’s sad that  True Fear: Forsaken Souls I doesn’t do well in the puzzle department. I mean, that really what the game is all about. Don’t get me wrong, searching for hidden objects is also fun, but it isn’t the meat of the game. I also have to question adding full 3D cut scenes to the game. Sure, it looks good, but is it needed to tell the story? Does it really make sense to put that much effort into a hidden object game, which isn’t exactly the genre with the largest fanbase? I don’t think so.

I truly wish that I could recommend  True Fear: Forsaken Souls I. There’s obviously a lot of effort here when it comes to the story being told, as well as with the game’s audio and visuals, but I just can’t do it when the puzzles are as bad as they are. This is only the first part in a planned trilogy. I’m really hoping the developers aren’t just going to put out another pretty game when the second part releases. I want something with substance, but I guess we’ll just have to wait and see.

True Fear: Forsaken Souls I earns 2 GiN Gems out of 5!

One thought on “True Fear: Forsaken Souls I Misses the Mark”