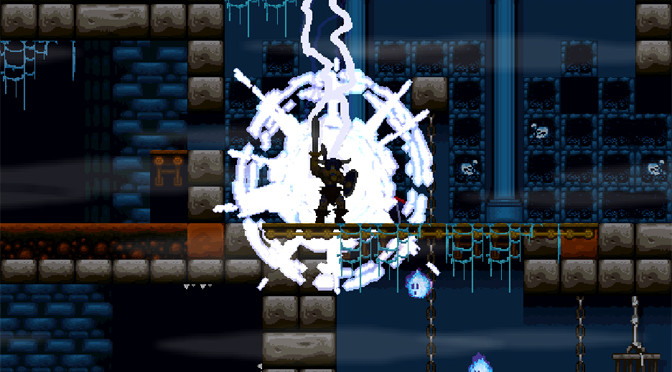 Remember how last year was a busy year for me with my New Year’s Resolution? Well, it was actually just a busy year for the Time Waster as well. I got back into mobile games when I picked up a new smartphone and there were a lot of really solid indie titles that came out. Many of these got reviewed as part of the Time Waster. However, there were other games that came out and didn’t make it into my library until recently. With game releases slowing down near the beginning of the year, I want to take this time to give those games proper reviews. I feel like they deserve that and it’s what I’ll be doing for the next month.The first game that made it into my library last year but never got reviewed is titled Volgarr the Viking.

Volgarr the Viking actually came out a couple of years ago and I remember thinking that it looked really good. I never bought it, but did end up getting it from a Humble Bundle last year. It got some fanfare, but never quite as much as I thought it deserved.

Volgarr the Viking is a side-scrolling platformers that does a great job of reminding players just how tough old games were. It pits players against groups of never-ending monsters with a limited arsenal and leaves it up to the player’s skill to progress forward in the game.

The main weapon in the game is Volgarr’s sword. He can swing it in front of him and can also duck and swing it at lower enemies or their legs to get past shields. While in the air, our viking friend can press down to put it below him and do a downward strike a la Link from Zelda II. He can also perform a spinning strike that gives him a slight double jump.

Volagar’s second trusty weapon is his throwing spears. He has an unlimited number of these and can use them to take enemies out from a distance. A powerup in the game allows the spears to be charged, which will have them dragging enemies off the screen when thrown in a satisfying show of power. These spears can also be thrown into walls and used as platforms to reach higher areas. It’s a necessity in the game to progress forward and there are some neat puzzles that require this skill to be solved.

While this last item isn’t a weapon, it is vital to Volgarr’s survival. This item is Volgarr’s shield. The shield has saved my life so many times from stupid mistakes that I can’t even remember. It’s not unlimited so too many hits can break it. It can also be upgraded and its this same upgrade that makes spears more powerful.

Traversing the world of Volgarr the Viking is tough. The game limits players with a slow walking speed and limited movement. Also, Volgarr has to dedicate himself to a jump and can’t change his trajectory mid air. Just like in an old Castlevania game. However, his slight double jump that I mentioned earlier can change his direction in air, but it really doesn’t give much in the way of vertical lift. There’s also a roll that lets Volgarr move past enemies without damage. It will also face him in the direction he came from, which makes it great for getting behind creatures carrying shields.

Volgarr the Viking has a few powerups that players can collect. The first is the base shield, then the upgraded shield that I mentioned above. There’s also a viking helmet and a flaming sword. All of these items allow Volgarr to take extra hits and better equip him to tackle the challenges ahead of him.

There’s one thing that I have to mention about Volgarr the Viking that sticks out due to the nature of this piece. In the game, players can advance forward beyond any worlds they’ve previously beaten by immediately walking to the left of the screen at the start of them. This is great for players that don’t have time to tear through the game in a single run. However, doing this also takes away the ability to see the A rank ending of the game. It kinda makes this a hard game to suggest for just spending some time on. It’s more like something that players should look at spending an empty Saturday with than a half an hour here or there.

The art in Volgarr the Viking is nice. It looks like a Super NES game, which is a welcome change from all that games that tend to stick with the more NES style of graphics when going for a retro look. It’s also bloody as all get out. Enemies explode into a collection of bones and blood upon death and Volgarr does the same. It’s a game that doesn’t shy away from violence and that works out well with a main character named Volgarr.

The audio in Volgarr the Viking is also really solid. The music isn’t the catchiest in the world, but it does fit very well with the tone of the game. There’s also a really cool feature for Let’s Plays that replaces the licensed ending theme with the main theme to avoid videos getting flagged, which is a really nice addition for the YouTube community. I though about doing a Let’s Play of this myself, but I figured nobody wanted to watch me die for hours on end.

Volgarr the Viking is a tough and merciless game. It doesn’t care about its players’ feelings. It will kill you over and over and over again without remorse, but it does look great and has some really solid gameplay behind it. It’s not for everyone, and that’s just fine.

Volgarr the Viking earns 3.5 GiN Gems out of 5!

Note: Go watch Deadpool. It’s amazing and lives up to the hype, but please do not take you kids thinking that they’re mature enough to see it, because you’re wrong.