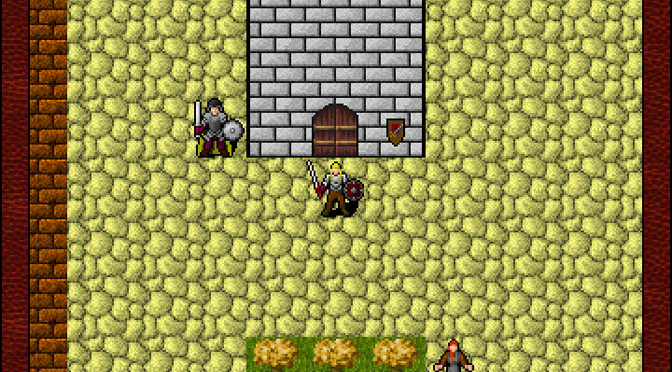 The mobile marathon enters its third week and I’m glad I had a stock of smartphone games saved up. My computer chair snapped this week and I use it for just about all of my gaming. Unfortunately, this means I was using a kitchen chair for work and it just wasn’t comfortable for me to want to stay in it for any period of time more than I had to. My new computer chair came in Friday, which is a blessing, but luckily I had The Lost Kingdoms to keep me entertained while it was gone.

The Lost Kingdoms is an RPG for Android devices that acts much like something straight from the early days of PC games. This isn’t to say that the game is bad, but it will definitely take the right kind of gamer to appreciate it.

For starters, the story in The Lost Kingdoms isn’t anything major. You play as a person that has lost their memories and is out on a quest to recover them. Along the way, you’ll run into all the RPG standards, such as shops, side quests and plenty of monster. All of this takes place in a large world that players will mostly navigate on foot.

The controls in The Lost Kingdoms are simple enough to get the hang of. There are four arrows for moving in different directions, another four buttons for access to different menus, as well as a single button for interacting with the world and the characters in it.

The movement system requires tapping an arrow to move in that direction. The world is split into a grid and one tap equals one move. This means that players will be doing this a lot when adventuring. It can become a bit of a chore when backtracking or heading back to a dungeon after fast traveling back to a town. Being able to hold the arrows for multiple steps would help alleviate this problem, but this isn’t an option.

When players enter battle with a creature, they start with two basic options: attack and block. When attacking, a bar will appear that shrinks down. The attack will take place when the bar is completely gone. Blocking brings up a similar bar, but it will have the player take reduced damage only if the enemy attacks while that bar is up. The player can also see the enemies’ attack and block bars, which adds a little strategy to the game’s combat.

Some enemies also drop loot after defeat. The type of loot that players can find are Luxury (which is gold), weapons, materials, scrolls, potions and more. Players can equip up to six pieces of equipment. There are no limits on the type of equipment that players can hold. This means that the player could choose to take six weapons into battle for major damage, or even it out with extra buffs to armor and magic power.

There are also other items that players can bring with them into the battle. This includes scrolls for casting spells, potions for healing and other items. Adding items to the belt lets players used them in combat, but the belt only has enough room for four items.

I can’t be positive about this, but I’m pretty sure that The Lost Kingdoms was made by someone whose first language isn’t English. I say this because there are a lot of grammatical issues in the game and awkward phrases. These aren’t just mistakes that I notice because I write for a living (I’ve probably just jinxed myself into making mistake by saying this.), but are rather the type that stick out to anyone.

A major plus to The Lost Kingdoms is that the game is completely free. I know what you’re thinking, though, and I’m glad to say the game will fail to meet your expectations. There are no microtransactions or advertisements in this game. It’s just a labor of love from a developer that is passionate about the fantasy genre.

The graphics in The Lost Kingdoms use pixel art. Unlike many games that do this, The Lost Kingdoms isn’t trying to look like a game from the SNES era of gaming. Instead, it goes after that classic computer game look. It’s a nice touch of nostalgia for sure, but I could see the lack of animations being a turn off for some players.

The audio in The Lost Kingdoms isn’t good. It’s mostly just generic-sounding clips of music that just come in at select parts. The sound effects are also the same. Yes, it fits with the retro feel, but still comes across as a little too empty.

Overall, The Lost Kingdoms is a nice way to waste some time. It isn’t for everyone, but those who enjoy these types of games will likely have fun with it. It may not do much different from other games, but it does what it does well. The lack of microtransactions and ads are also a breath of fresh air in the current era of gaming.

The Lost Kingdoms earns 3 GiN Gems out of 5!