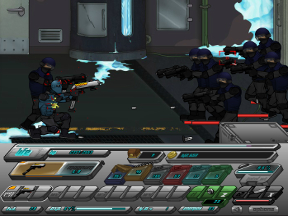 This week I ran around the internet to find a great Time Waster, but I didn’t find one. Instead, I found Tek Tactical. I really didn’t find anything that tickled my fancy this week, and I didn’t want to review just another average joe game. This led me to choosing what I felt was the worst game discovered in my weekly adventure.

Tek Tactical is a side-scrolling shooter that puts the player in the role of Blue Deadpool. Okay, so the character probably has a name, but he really does just look like a blue version of Deadpool. The only story given is a few opening scenes that show Blue Deadpool to be a mercenary that has a love for sneaking around and cigarettes (sounds kind of familiar). Unlike the two characters that seem to inspire Blue Deadpool, he is horribly boring and has that cliche personality that every action hero dons. The idea is that this is Blue Deadpool’s final mission as the waves of enemies are just too much for him.

Let’s get started into why that is a load of bull.

After watching the less-than-inspired opening, the game allows players to choose from easy and normal difficulties. I selected normal. After this, players can jump into the ga’ wait a second? What’s this ad doing here? This is where is all starts going downhill. Every time the player loads up a new stage to play in Tek Tactical, they must first watch an ad. To make matters worse, each ad has a mini-game where players can click on floating money to collect it, but if you miss you click the ad and off you go to another website.

This is a beyond stupid concept. Having ads in your game is one thing, but forcing players to watch them before every level and then trying to trick them into clicking on the ads is downright dirty. I don’t know anything about the two guys that made this game, but EA’s CEO might want to be on the lookout because they should both be in the running for his job.

But maybe really solid gameplay that challenges the player in a fun way can save the game? Wrong!

As I said before, Tek Tactical is a side-scrolling shooter. What I didn’t mention is that the game has features of an RPG. Players can level up for killing enemies and spend points from leveling up to increase stats. These stats are broken. I pumped all of my points into the luck stat and watched as I critical headshot everything in the area.

Making matters worse is that the creators of Tek Tactical actually thought to give Blue Deadpool his real counterpart’s healing factor. This means that players can take on large groups of enemies without worry of dying. I’m serious about this. At one point I let enemies build up and watched as my health consistently regenerated faster than what they could damage me.

The actual gameplay of Tek Tactical isn’t all that grand either. Players move Blue Deadpool around with ASDW or the arrow keys and aim and shoot with the mouse. Holding shift will cause Blue Deadpool to crouch, which makes for better aiming and faster reloads. This resulted in me just crouching in the middle of the stage without trying to take advantage of my surroundings and unloading into enemies. Not helping the game in between stages are the horribly cluttered and hard to navigate menus.

The graphics in Tek Tactical are easily the best part of the game, but that isn’t saying much. As I’ve already mentioned, the main character is a palette swap of a Marvel character. Enemies in the game also suffer from palette swapping. There are three enemy types: blue, red and yellow. Each of these types looks exactly the same minus the color change.

Finally let’s talk about the audio. Tek Tactical tries to ride off of the recent popularity of dubstep and electronic music. However, the game misses the mark with bland music. I’m of the opinion that these are two of the hardest types of music to do well. It’s either hit or miss, and most of the times it’s a miss.

As for Tek Tactical’s sound effects? Guns sound like guns and there is a blaring siren in almost every stage. That’s it.

Tek Tactical is a horrible game. Yes there are lots of bad games out there, but it’s been awhile since I’ve actually found something like this that gives me good reason to rant. My main complaint is how the developers of the game try to trick the players into clicking on ads and force ads to be watched before each level. It also doesn’t help that the game isn’t actually good enough to warrant these features. I’m not against watching a few ads if it lets me play a great game, but that just isn’t the case here. It also doesn’t help that the entirety of the game is horribly uninspired.

Tek Tactical goes the extra mile in the wrong direction and earns 1 GiN Gem out of 5!