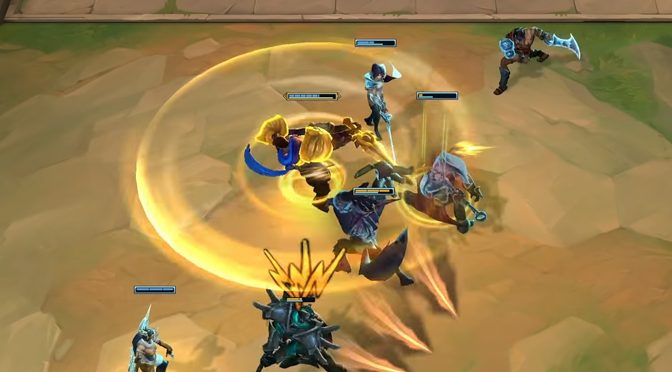 I’m mixing it up again this week. Not only are we looking at a game still in its beta, but it also happens to be a spinoff from another game. That game, or mode if you will, is Teamfight Tactics.

Teamfight Tactics is the evolution of autochess from way back in the Dota days. As such, it only makes sense that this is a mode available in League of Legends, which is itself a game that spawned from Dota.

Here’s the thing about Teamfight Tactics, it truly isn’t anything like normal League of Legends at all. Instead, the game is all about building up teams of characters, choosing their positions on the board and then letting them fight it out without the player’s control.

What this means is that Teamfight Tactics is a much more laid back game than League of Legends is. However, that doesn’t mean it’s a walk in the part. There’s still plenty of strategy that goes into the game and it’s really great for those without the reflexes to enjoy League of Legends, or other Moba games.

There’s also a lot more options for strategy lovers to consider in this mode. This includes the different types of buffs that characters can give each other. Most characters have two types to them. (There are the occasional characters that have three types, but there are only a couple of them.) Think of these as Class and Origin. That’s how it was explained to me and it works enough to get the hang of the game.

Characters with matching Classes or Origins can provide each other with buffs. These include Pirate, Ninja, Noble, Knight, Sorcerer, Void and many other types. Sometimes characters will have multiple overlapping types, but many times players will have to mix and max to get the results they want. Trying to stack only two or three types seems to be the best as it grants access to better buffs. Granted, I’m still fairly new to Teamfight Tactics, so I could be completely wrong about this.

Players also aren’t able to just choose whoever they want for teams. Instead, Teamfight Tactics starts off with a draft. There are eight players in the match and each of them grabs a character. After this, they build up money for a few matches against minions. In between each round, the player gets a new selection of five champions to choose from. They can also spend money they earn from fighting to refresh and buy more champions, as well as level themselves up.

Buying more champions of the same type causes them to fuse together and level up. If players would rather level themselves up, then they gain the ability to place more champions on the field. The game is all about balancing these options to determine what’s the best outcome the player can come to.

After grind away on minions for a few rounds, the eight players all start fighting each other. Players can get both win and loss streaks to help them gain more gold. The game also breaks up every few rounds to do another champion draft. Players with the lowest health get first choice. There are also other minions and enemies for the player to face that can give additional gold and items. These items can be quipped to champions to make them more powerful. Players can also fuse items for better ones.

In terms of the visuals and audio, Teamfight Tactics reuses most of what is already available in normal League of Legends. That’s means there’s really not much new to talk about here. What is worth noting is that LoL has low spec requirements, which means it’s easy to play on just about any computer. That probably holds even more true in Teamfight Tactics due to the player not having to constantly interact with the game.

So here’s the thing about Teamfight Tactics. The game, mode, whatever you want to call it, is still in its beta. That means I won’t be providing any kind of score for it. At the same time, it really does feel like a complete game. Sure, there will be updates that balance it and probably add more Origins, Classes and champions, but that’s not really different from any other game getting update patches. So with that in mind, feel free to check this game out without any worries about it not being a full release.