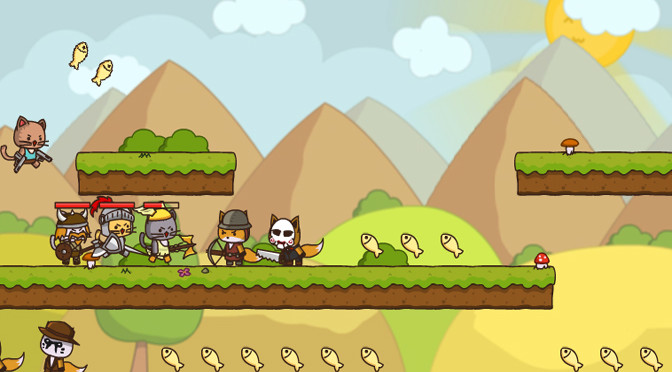 This week my search for a Time Waster led me across the internet until I discovered a game titled StrikeForce Kitty. It’s a running game that involves very little input from the player (like most running games).

The story of StrikeForce Kitty is that the King’s wife/daughter (I’m not quite sure which it is) is kidnapped by evil foxes and he sends out his kitty strike force to retrieve her.

StrikeForce Kitty takes it easy on the player and only gives them the responsibility of controlling when the cats jump up and down onto different levels during a run. This is easily controlled by the Up and Down arrow keys. This makes the controls about as simple as they can get, yet the game still manages to have issues.

StrikeForce Kitty suffers from some serious lag issues after being played for only a short while. I know lag can be a problem with browser-based gaming. I also know that a simple reload of webpage can be done to fix this. However, StrikeForce Kitty’s lag issue is so frequent that it became more than a minor nuisance. The game could go for maybe 10 minutes before it started lagging and this really messed with controlling the feline heroes/heroines.

Another issues with the jumping in StrikeForce Kitty is that it can be inconsistent. All of the cats follow the same path and are supposed to jump at the same time that the cat in front of them did. This isn’t always the case. Sometimes in battles, the cats can mess up and find themselves on different layers in the level. This can leave the player watching as they stop running and attack air.  The only solution to this is to reload the level.

StrikeForce Kitty differs from other running games in that it has battles, as I’ve already mentioned. These battles can net the player experience and items to help increase the stats of the cats. It quickly becomes obvious that the best way to get ahead in this game is to fight the same enemies over and over again until a full set of their equipment has been obtained. Equipping a full set of items will give a cat a set bonus. There’s no lack of outfits either as the game has 80 of them.

The feline do-gooders inStrikeForce Kitty can also level up by gaining experience. Experience is given in the form of fish treats. These can be picked up while running through levels and obtained by defeating enemies. Just like with equipment, leveling up allows the player to increase the stats of their cats to get further in the game.

The graphics in StrikeForce Kitty aren’t bad. They have their own unique style that works really well for this type of game. Unfortunately, the issue of lag mentioned earlier can make it hard to appreciate the game’s simple, but cute graphics.

Audio in StrikeForce Kitty is easily forgettable. The tunes aren’t bad while playing the game, but nothing really sticks out in such a way that it will be remembered.

Overall, StrikeForce Kitty is alright, but it has some major issues. The frequent lag makes the game a hassle to play and it doesn’t really have anything amazing in the sound department. I do like its unique leveling and equipment system, but the lack of being able to input simple commands due to lag does a lot to hurt this game.

StrikeForce Kitty runs and battles its way to 2 GiN Gems out of 5!