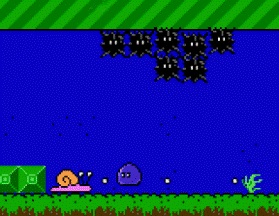 Hello everyone! Do we have any Metroid fans sitting around in the audience today? We do! Well that great news because I have a game that you will all love. I’m talking about Snailiad.

The best way to describe Snailiad is to say its Metroid with snails (never would’ve guessed by the name would you, lol). Okay so it’s kinda like Metroid but there are a few differences. For example Snailiad has a much more lighthearted tone to it than any Metroid game to ever exist. Instead of hardcore bounty hunter Samus we’ll be playing as Snaily Snail (and on hard mode as Sluggy Slug! I’m not kidding.).

Along with the games more happy go lucky feel are happy go lucky weapons and bosses. Feel like beating an enemy to death with boomerangs? Go for it! How about having to fight against a giant set of feet with eyes that is appropriately named "Stompy"? Sure, why not! We also can’t forget about the villagers located around the world and in Snail Town. The ridiculousness of your fellow snails is almost something to be ashamed of if it wasn’t for the fact you were laughing so hard at them. Like the one whose dream is to one day eat a pizza or Cave Snail who always finishes his sentences with "Thurgle Burgle". The sheer amount of goofiness is one of the main reasons I enjoyed it so much

On our epic quest to save Moon Snail we will run into many enemies along the way. How best to combat those enemies? With a gun and if that doesn’t work…use more gun (Team Fortress 2 Engineer reference). Right, so there are three different weapons in the game: the peashooter, the boomerang, and the (constructicons combine to create) devastator. Along with these weapons you’ll run across powerups for your weapons and yourself. These range from simply increasing your defense to being able to control your own gravity.

More important than the fighting in the game is the adventure. With hidden passages strewn all about the land you can be sure to spend quite awhile finding everything in the game. It took me just under three hours to beat the game while collecting everything, which might not seem to long but I want you to remember that this is a flash game. In the end you’ll want to collect it all though because getting all the Helix Shells will allow you to transform Moon Snail back into Sun Snail, which means you can play through the game in Slug mode! Sluggy Slug is a little faster than Snaily Snail (I assume because he lacks a shell) but also takes more damage and doesn’t heal as easy as Snaily. These tradeoffs make the game different and harder. Before you storm off into your second playthrough you might want to hit up Boss Rush. Boss Rush is a mode where with limited powerups you must defeat beefed up versions of all the bosses in the game as fast as possible.

So while Snailiad isn’t the most original game out there it is appealing in its own right and as such it deserves quite a few GiN Gems for it hard work. How many you ask?
I think 4 GiN Gems out of 5 sounds like a fair number.