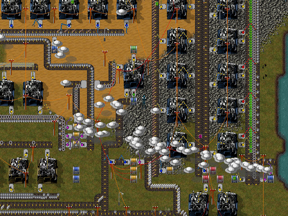 This week will be a little different from our normal romp through indie games. Remember back when I reviewed the beta of Cardinal Quest 2 (Which you should go vote for on Steam Greenlight)? Well this week I’m taking a look at another game in its early stages that is just looking for some love from the indie gamer community. This game is Factorio.

What is Factorio though?

Well imagine if Minecraft and Dune had a child. The kid would live in this modern era, but like so many of us have love for their heritage. They’d listen to their parents’ music, dress like them and maybe even take over the family business. Let me go into a little more detail.

Factorio uses the top down view that was standard for real time strategy games in the early nineties; it’s got the graphics to match that era as well. Now all of my readers know my love for retro graphics but this is one case where I think an update is needed. I’m not saying I want Factorio to go full blown HD graphics on me, but I do think some refinement would help. Factorio is in its Alpha stages though and the game is obviously going to be getting more polish, I’m just pointing out that this is one of the areas that could use it most.

Audio is Factorio bears a closer tune to Dune than Minecraft. Sound effects are really simplistic but they get the point across. One thing I didn’t like was the sheer lack of music in the game. Sure I’m stranded on an alien planet all by myself so utter silence makes sense, but it also left the atmosphere lacking. Some simple tunes to compliment the sound effects would really go a long way here.

Now we get to the meat of Factorio, gameplay. As one would guess from the name Factorio deals a lot with factories. The game starts out relatively simple. Dig for all of the materials needed with a pickaxe and use them to craft basic survival items like chest and furnaces. This is where the game shows its’ relations to Minecraft. The difference here though is that Factorio takes these basic ideas and expands upon them. Why stop at making a pickaxe when you can make a machine that mines for you? No need to carry everything back and forth to chest either, a simple conveyer belt system hooked up to mechanical arms can do all that hard work instead. Before long there is a hydro generator hooked up to the nearby river and electric poles running everywhere to power all these wonderful creations. This leaves the player doing a lot of micromanaging all these machines, but it doesn’t stop there.

As I mentioned earlier this game is also about survival. Crafting a gun and ammo is a definite must to survive. After all we wouldn’t want any Creepers (no, they don’t blow up) to come running into this beautiful factory and wrecking havoc. Sure sitting by on guard duty all the time will get the job done, but then how does one explore the world for more resources? Easy, build turrets to defend the base. Just make sure to keep them stalked up on ammo, nothing like getting up to grab a drink only to return and find yourself dead.

I know some of my readers are already thinking it and yes, Factorio does feel a lot like playing the Tekkit mod for Minecraft. For those who own Minecraft on a computer and think they can handle it I implore you to give Tekkit a chance. While Factorio does feel similar it also is different enough to warrant playing. The game is only in its Alpha and already I like what I’m seeing. For those who think they would enjoy Factorio follow this link (http://www.indiegogo.com/factorio) to Indiegogo and show the developers a little bit of love from an indie gamer.

I’m giving the Alpha of Factorio 3.5 GiN Gems out of 5! It’s a little rough around the edges but I believe a gem is in this Alpha.