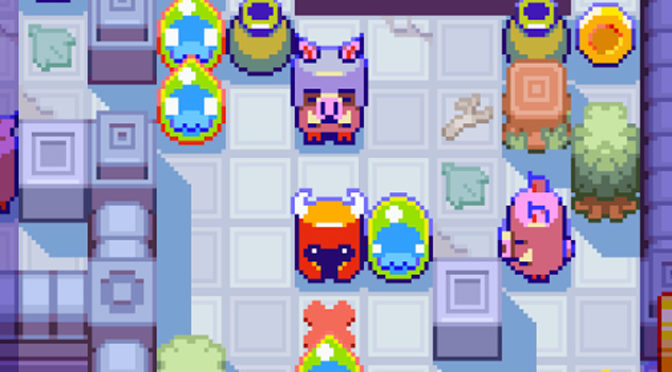 This week I discovered a game called Rust Bucket to entertain myself with. It’s a mobile game, but I actually found it while browsing the internet from my computer. It looked super neat, so I decided to give it a chance.

Rust Bucket is a turned-based puzzle game that puts players in the shoes of a bucket. The bucket actually looks more like a helmet and he carries a sword as well. Our bucket friend is very rusty and can only take a single hit from enemies, which means that players will have to be very careful with how they play the game.

There are 40 levels in Rust Bucket and each one is filled with enemies and puzzles to overcome. Many times the enemies are a major part of the puzzles. Players move the bucket in the direction they want by sliding their finger across their screen in that direction. Holding down after sliding will have the bucket continue to move in that direction until it hits an obstacle or the player lifts their finger. It’s a simple control system that takes no time to get used to.

The various levels in Rust Bucket can be quite challenging, but the game does a great job at easing players into it. This includes the first few levels introducing the basic concepts of the game. What I think I liked most is the lack of tutorial. Instead, players are just dropped in the game and expected to learn by experience. “Don’t know when any enemy will attack and when they won’t?” Watch for specific animations or learn their behavior. Some enemies will require the player to experiment and die to figure out their patterns, but the game is great about providing checkpoints throughout the various sections of each level. This means that players will never be sent too far back for just for testing an idea.

There’s also an endless mode in the game that has randomly generated levels. This is a great addition for fans of the Rouge-like genre (such as myself) as it adds a huge amount of playtime to what is already a long mobile game. There are also coins that can be picked up in this mode. Players can use these coins to continue in this mode even after defeat.

I was really surprised with how well done the puzzles in Rust Bucket are. The game is completely free to play and the only microtransaction removes ads. Despite this, it’s very much a full mobile game that will keep players entertained for hours. Also, ads don’t really come up all that often, and when they do it’s never a video or anything like that. More developers should consider following Rust Bucket’s example when it comes to ads in their games.

The art style of Rust Bucket is great. It has a retro look to it, but nothing looks like its been borrowed from another game. Sure, some of the enemies may seem  a little generic at times (I’m looking at you, slimes), but obvious detail has been given to their animation and it really helps them stand out. It’s also just overall pleasing to look at and isn’t hard on the eyes.

The audio in Rust Bucket is great. It’s a got a a few catchy tunes that keep it interesting. This actually makes it a rarity. I typically keep the audio off when playing mobile games, but it’s worth it to keep it on with this one. The sound effects are also great and I didn’t find any issues with them.

Overall, Rust Bucket is a wonderful smartphone game. It’s the type that doesn’t really come around all too often. It has great gameplay, music and graphics; it’s free, and the ads aren’t so persistent to the point of annoyance. There’s also not a bunch of useless microtransactions in the game either. Seriously, give this one a download.