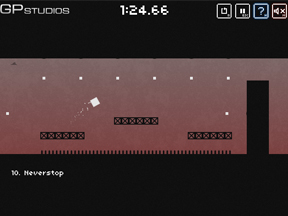 How many of you have heard of and played the Impossible Game; a game where you are a block jumping over obstacles? It was simple yet hard right? Well this week I have a game that is somewhat similar but not nearly as impossible. It’s called CrateRun, and in this you also take control of a block jumping through obstacles. However, there are plenty of differences between how the two games play. So for those of you who want something you have a better chance to beat, I’ll tell you why you might want to give CrateRun a try.

As I said, in CrateRun you take control of a block (or rather a crate named Cratey) and have to jump your way through obstacles to get to the end of each level. Thankfully you have full control of your block’s movement, so you’re able to decide where you want to jump and when. But your block doesn’t just jump over things though; you also have the ability to jump up walls, and there plenty of levels that will test you on that skill.

Throughout each level there are different things you have to get through: spikes, canons, and falling away platforms just to name a few. At first things are easy (of course), but some of the later levels really test you to a point where you’ll be dying and respawning a LOT. But even with how often you die in this game you won’t find yourself getting frustrated (at least not as much as you would expect). There are one or two levels that will really get under your skin, but I’m willing to bet that you’ll find yourself continuing on to beat it instead of calling it quits (at least this is how it was for me).

So that’s the point of the game: get through the obstacles, however hard they are, and reach the end. The rest of the game’s assets are about as simple as the game’s goal, but this is not a bad thing. Despite being simple, flat colors on a gradient background, everything in CrateRun reads perfectly and looks good doing it. Yes, I know I said that they’re just flat colors, but there are plenty of games that look good with simple art choices, and this is one of them. The same thing goes for music: one song on loop and a couple 8-bit sound effects where needed. Simple, but my ears enjoyed it.

As for the game’s controls, the block responds accurately to commands and there is no wait time between when you die and when you respawn, which makes the game a lot harder to get frustrated at. You can’t really ask for more than that.

So after all’s said and done, even though CrateRun isn’t something groundbreaking or mind-blowing, it’s still something I recommend since it was fun to pass the time with. That’s what you mainly look for in a game anyway, and CrateRun succeeded in that.

CrateRun earns 4 GiN Gems out of 5!