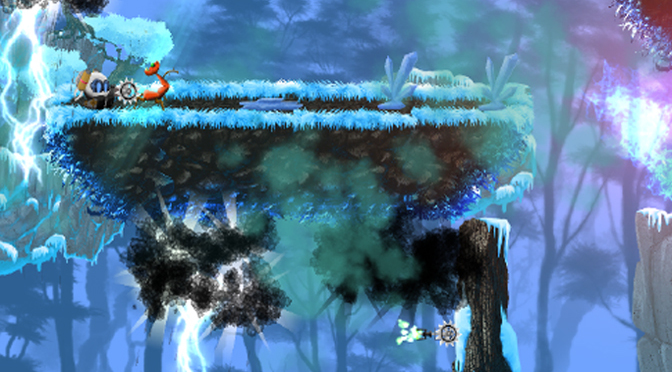 Yeah, I’m a couple of days late, but I don’t exactly have control over that. I hope everyone enjoyed their turkey or whatever type of meal you had. Being that this was a holiday week, it’s needless to say that I was a little busy. This left me looking for a time waster that wouldn’t interfere with my plans or my playing of Super Smash Bros. for Wii U (review coming soon). What I found was Robotex.

Robotex is a side-scrolling game that puts players in the role of a small robot that’s out to kill off a planet’s population. The little guy is doing this because Earth has become uninhabitable and humans need a new home world. It’s basically what Wall-E would have been if Disney hand’t made it.

The gameplay of Robotex is simple to say the least. Players move from the left side of the screen to the right destroying enemies that get in their way and dodging obstacles. Unfortunately, this is hard to do when the player doesn’t control the robot. Instead, the robot moves forward at a constant speed of his own and players have no control over this.

What players do have control over is vertical movement and weapons. Weapons are tied to a single key and more often than not players can just hold that button down when playing. Alright, maybe players don’t have much control over weapons. However, jets do allow players to control the little robot’s up and down movement. The controls here are a bit floaty, which doesn’t mesh well with the gameplay in Robotex.

The vast majority of Robotex is spent dodging obstacles (with that wide range of movement I just mentioned above) and trying not to die. This isn’t exactly easy to do as the lack of controls and floaty controls make it difficult to do much in the game. It really creates an experience that feels like it’s doing its best to not engage the player.

Probably one of the worst parts of Robotex is the random deaths. The game likes to throw obstacles at the player that in no way could have been dodged without prior knowledge of them being there. These cheap death leave players going through levels multiple times just to get back to that point. As I said above, the gameplay isn’t all that engaging and this becomes a real bore early on.

The graphics in Robotex are easily the best part of the game. Actually, they’re just good in general. The backgrounds have a lot of detail to them and the creatures really do have an alien look. It just sucks that the rest of the game can’t meet this standard.

I guess that last sentence kind of gave away my feelings about the audio didn’t it? It’s not that the game has horrible audio it’s just that there isn’t much of it. Missile fire and explosions are the two biggest sound effects in the game and they easily wear on players after being heard so frequently and basically all of the time playing. There’s also a lack of music in the game, minus the main menu, and the levels didn’t have anything in the way of atmosphere via sound.

Overall, I can’t recommend Robotex to anyone. The game costs $3 and that’s $3 too much in my opinion. With how easy it is to find free game to play in your browser, I don’t see why anyone would pay to play this. I know, I’m being rough and this is an indie title. So here’s my bit for indie developers. Don’t expect to release bland, uninteresting games and get praise because you’re indie. I love that the indie market has exploded in popularity these last few years, but let’s not bog it down with generic titles that aren’t worth anyone’s time or money.