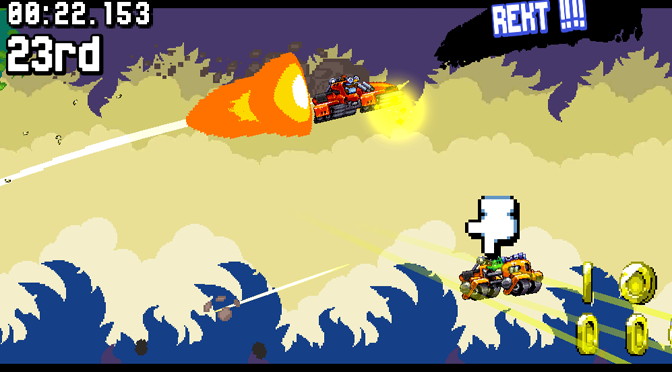 I’ve been on the move a lot this week and needed something to play on the go. Luckily, my adventures in time wasting brought me to a mobile game known simply as Road Warriors.

Road Warriors is a 2D racing game that has players competing against other racers in an attempt to take first place and the gold trophy. The game puts players behind the wheel as Cluck, a chicken that is out to be the best racer in the universe.

Cluck’s goal to become the best racer in the universe requires a lot of work. The game sets players up with a single race every day for them to take part in. Players can also take part in races from previous days, but this requires them to watch an advertisement before they can do so. The game also features video ads in between every couple of deaths.

The races in Road Warriors aren’t just as simple as reach the finish line. There are loads of other racers on the track, and there are no rules. This means that players attack each other while racing. When a player gets close enough to another racer, a crosshair will come up on them. Tapping this will zoom in on the player and this racer. This slows the game and lets the player fire shots at the person by tapping on them.

Defeating another racer in Road Warriors will give the player a boost. This boost allows them to blow through obstacles, such as rocks, that they may encounter on the track. The boost happen instantly, which means players can’t save them back. Players also get boost for performing front flips and back flips. The more flips, the more powerful the boost.

Competing races is fun, but Road Warriors also lets players customize their vehicles. This includes the ability to change out the wheels, cabin, engine and other parts, as well as color These parts have different stats and players can also upgrade parts to increase their stats. New parts come from winning races and opening loot boxes. Players can take parts they already have and turn them into scrap for upgrading, which also requires coins.

Road Warriors has players collecting coins during races. Coins will come from enemies that they kill and also appear on tracks. Players can use these coins to buy loot boxes and upgrade parts. They will also unlock checkpoints during races. These checkpoints allow players to restart the race from that position following death. However, they get progressively more expensive the further into the race the player gets.

The one negative of Road Warriors is the frequency of the video advertisements. There’s an option to pay $4.00 to get rid of the advertisements. This also unlocks unlimited checkpoints and includes some coins. I’m not one to ever turn off ads in mobile games, but I can’t deny that I’m seriously considering making an exception for this one.

Road Warriors uses pixel art to present players with a screen full of action, death and high-speed racing. It really looks great on a small device like a smartphone. There are also several changes in the visuals, such as speeds lines when boosting, that show extra care for the game.

The audio in Road Warriors is also wonderful. The sound effects all fit with the game and are at proper volumes. On top of that, it has a rockin sound track that fits well with its visuals and theme of the game.

Overall, Road Warriors is an excellent Time Waster. The setup makes it easy to jump on for a few minutes every day to race, and then forget about it until tomorrow. It looks great, plays great  and I only ever suffered from framerate issues a couple of times. I blame this more on my old smartphone than I do the game, though. Give it a go if it seems like your kind of game.