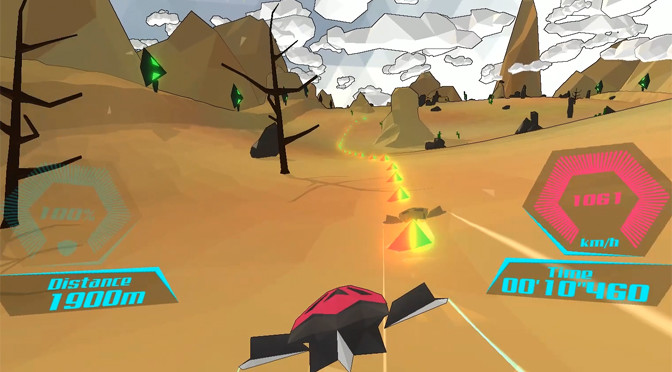 Alright, so I had a bit of a disappointing time last week with PolyRace. It happens, it sucks and sometimes an update can fix the problem. That was the case this time around. The developer reached out to me and worked out the problems with the game. I love the indie scene for this reason alone. The developers care. It’s not something you see a lot in AAA titles anymore and that’s a bit of a black mark on them for me.

I’ll start this off by saying that PolyRace is about high speeds, tight turns and competing against others on a large variety of different courses (45,697,600 to be exact).

The controls in PolyRace are really easy to get the hang of. The Arrow Keys control movement and the Space Bar uses boost, which is unlimited. Players don’t have to hold anything to accelerate to the top normal speed without boost, but holding the Down Arrow Button will slow them down.

The controls in PolyRace perfectly suit its high-speed gameplay. Not having to hold a button to accelerate is a wonderful idea that more arcade racing games should embrace. It also gives a real use for the brakes, which are often ignored in favor of drifting or letting off the gas at the right moment on other racers. It may take a little while to get used to, but it works really well. Also watch out for boosting too much, as one or two strong hits will result in a blown up hovercraft and a failed race.

There are a few different modes of play in PolyRace: Time , Distance and Endless. The first two will be what players experience most as they make up the majority of Missions in the game. They’re also currently what most other players online choose, but I’ll say more on that in a bit.

Time mode has players rushing to the finish line as fast as they possibly can. Distance mode challenges players to go as far as they can in a limited amount of time. It also includes stopwatches that pop up along the way to give extra time and prolong the race. Endless mode is self-explanatory.

When playing the different modes in the game, racing to the best of your ability is what it’s all about. The game goes the route of ghosts that players can race against instead of live play with other players. I personally prefer this anymore as it makes it easier to take on other players without having to wait for a lobby to fill or set up times to get together with friends. Also, racing against someone’s ghost guarantees that you’re playing them at their best without any distractions. This makes it all the more satisfying when you win.

To play against another person’s ghost, players will select the Challenge option on the main menu. This is also where they go to create their own ghosts for others to race against. The system is set up so that players have 10 minutes to do their best when creating or challenging a ghost. After this time is up, players can’t make new ghosts or challenge that other player on this course again. This is a very fair way to go about it and it of course takes the best record when making ghosts. The game also tracks total games played, won and lost against other players.

PolyRace also has a Race of the Day option. This option allows players to all take on the same race as many times as they want that day in an effort to climb to the top of the leaderboards. It’s a small feature, but it makes it great to pop on once a day and play the game, and maybe do some extra racing if you’ve got the time.

As I mentioned above, there are also Missions to be challenged in the game. These require the player to complete different races as best they can to unlock stars. There are five stars available for each mission and more stars are required to unlock more Missions. Each of these races also lets the player challenge the developer’s ghost if they get a good enough result. They can be played as many times as the player wants.

There’s also a mode in the game to practice with the different courses and vehicles that are available. As I’ve already mentioned, there are a ton of levels to be played and a Randomize button is included to keep the challenge fresh. Each level also has an Easy, Normal and Hard challenge option,

The levels in PolyRace are split up into three different types: Desert, Arctic and Continental. Deserts are filled with sand and cacti, the Arctic is covered in snow and rocks, and Continental is filled with trees and other obstacles. The vehicles control the same in each area, so it really just comes down to what scenery the player likes best when choosing a new level to play. The only real problem with this system is that it means none of the levels really stick out as unique or memorable, which makes it near impossible to have that “This is my favorite level!” feeling.

Have I mentioned yet that PolyRace features some awesome graphics? Okay, so they aren’t HD or anything like that, but they still have a distinct feel to them. The game uses a lot of flat colors on low-poly models that makes it feel like something from the N64 era of gaming. Also, vehicles are bright neon colors that stand out against the rest of the world. It’s a nice look that sticks out as unique in a time where the focus is either on SNES-styled sprites or individual hair follicles.

The music in PolyRace is all techno in feel and this matches well with the graphics in the game. It immediately made me think of Tron Legacy, which is never a bad comparison in my book. Each of the different level types have their own theme and this helps them stand out from the other options. I’m currently digging the Continental theme. The sound effects in the game are also up to snuff with the rest of the aesthetics.

Overall, PolyRace is a really solid racing game. It’s got a lot going for it with its almost endless amounts of levels and ability to play against the ghosts of other players. The controls are also different in a way that fits its arcade style. It helps scratch that F-Zero itch I’ve been wanting to fill for years, but I’m still waiting for Nintendo to revisit the series.

PolyRace speeds its way to 4 GiN Gems out of 5!