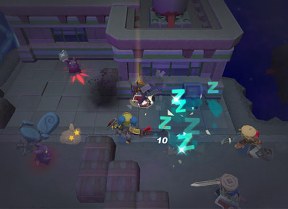 All right, no one should be alarmed or anything but I’m about to drop a bomb on you…I’ve been playing an MMORPG. *Gasp!* Don’t worry though it hasn’t consumed my life or anything. In fact it would be awfully hard to have your life absorbed by this game in the first place.

See, Spiral Knights is a free MMORPG released by Sega and as we all know adding free to a MMO doesn’t always make it good. In fact it usually does the exact opposite. Now I’m not going to say that Spiral Knights is a bad waste of time or anything. It’s just that it feels really casual to be a MMO (GiN Sunday Comic anyone?) Most of the reasoning behind this is its incredible lack of depth in anything.

Unlike the average MMORPG Spiral Knights doesn’t focus on leveling up your character and working your way down a ridiculous amount of skill trees just so you can flash a Lv. 80 that signifies many wasted hours of your life to everyone. Instead you’ll work on leveling your equipment by collecting heat from creatures and chests in the underground Clockworks. It’s like dungeon crawling; except everything is kinda steampunkish instead of being all fantasy filled and stuff. The huge advantage here is that doing a single level only takes about 10 to 15 minutes and it’s really easy to find a party to team up with. It’s perfect for spending some time between classes or filling the extra time in your lunch break. I’m only saying you should play it at these kind of times because I would never condone playing games in class or while at work ; ). (Quick piece of advice to the people developing the next version of Word, add support for smiley faces so I don’t have to see squiggly green lines all the time, lol)

So what about the actual gameplay itself you ask? Well it about a simple as the rest of the game. You have two different weapons a sword and a gun. Each one has an advantage and it isn’t hard to see why. Let’s start with the sword. Swords are more powerful than guns are and can hit multiple enemies at once. The disadvantage is that you’ll have to be up close and personal it you want to use them. Sure you have a shield and with proper timing you can block an opponents attack but that won’t save you from a horde of enemies or one big beasty. This is where the gun comes in. Now as you have probably guessed the gun is weaker than the sword and can only hit one target at a time but you won’t have to worry about being beaten to a pulp. It’s an easy system to understand and even more easy to play.

So what else do we have going on here though? We’ll how about purchasing guns and swords that fit your different and unique play style then? You’ll find a wide variety of weapons available to you, from guns that shoot in three round burst and swords that get bonuses depending on what you’re fighting. So go ahead and pick and choose your favorites.

The overall graphics of Spiral Knights aren’t bad either. The game uses hard cel shading and a cartoony look to create an atmosphere that lets you know it isn’t as hardcore as its overly serious counterparts. The world looks vibrant and fun because of this even if there isn’t much detail to be found. Also on a side note here, anyone who has ever played Kingdom Hearts will notice huge similarities between the Knights in the game and some of the heartless that are found within the first game. I don’t know if this was intentional or not but to be honest if you’re going to copy someone then it might as well be Tetsuya Nomura.

After looking over everything here I’ve come to a conclusion. Spiral Knights is the perfect way to introduce children of young ages to the world of MMORPG’s and it also have enough variety to count as a game a family can play together (granted they would have to be a gamer family but you get what I’m saying). If not for this reason then the game is perfect to jump onto for about 30minutes a day without feeling like you are required to play more. A casual MMO, who would have thought it wasn’t actually that bad of an idea (granted it still isn’t amazing).

I’ll give Spiral Knights 3 GiN Gems out of 5!