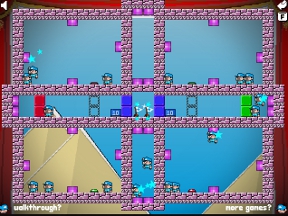 I was hoping to return to my computer this week to bring you the third chapter in The Last Door, but sadly it’s not out of its Beta yet. Hopefully I’ll be able to give it a go next week, but if not I’ve got another couple Time Wasters stored up that I’ve been wanting to share. That being said, I still did return to my computer, but it was for a much different game that what I originally intended.

This week I played a game called Enough Plumber 2. I think I might vaguely remember playing Enough Plumbers One, but I never dedicated enough time to it for it to be a Time Waster.

Enough Plumber 2 puts the player in the shoes of a blue plumber that travels through pipes to reach the end of levels (sounds kind of familiar). That alone might make this game sound like a Mario rip-off, but it’s so much more than that. Instead of earning points for collecting coins, this plumber uses them to make clones of himself. Players will use these clone to solve various puzzles and reach the end of the level. Sacrificing clones and often times the original plumber is a must to get through this game. There is even a technique called coin jumping: this requires players to jump into coins to create clones and then immediately jump with the clone to reach a previously unattainable platform or even another coin.

Enough Plumbers 2 also has multiple power-ups that will add to the twist and turns of completing a level. These power-ups combined with the unique game mechanics and interesting level designs makes the game a fun and addicting challenge that isn’t so hard that it will scare away more casual gamers. I did have one level that I absolutely could not beat: Level 28. I knew how to solve the level and I made it close to the end multiple times, but I always screwed up in the end. The game does allow players to skip over a level here and there, which was fine by me if only for the sake of reaching the end of the game for this review.

The final level of Enough Plumber 2 is actually a boss battle. This kind of surprised due to the game seeming to focus more on puzzle solving than platforming. The final boss is a fun challenge that took me a couple of tries to defeat. It was a nice mixture of platforming and puzzle solving that left me with a good feeling after it was all said and done.

Graphics in Enough Plumbers 2 are a good example of paying respect to another game. The style is basically the same as Mario and there are a lot of references to be found while playing. Different though is how the characters in the game look once having been seen close up. Our Mario look-a-like isn’t exactly a dashing hero. To be fair, Mario doesn’t exactly look like a hero either, but the plumber in this game looks like he got his face smashed in for hours after calling Bowser’s wife fat. The Princess doesn’t look much better to be honest, but hey, true love looks past appearance, right? I should probably mention that this isn’t a bad thing. The game is obviously poking some fun at a much loved classic and shouldn’t be disregarded for it.

Audio in Enough Plumber 2 is great. The music is reminiscent enough of tracks that are found in Mario games that it feels familiar (in a good way), but is also different enough that it comes across as something fresh and new. Sound effects are spot on for what a Mario game would use, which is a plus.

Overall, I really enjoyed my time with Enough Plumbers 2. It’s a neat game with interesting mechanics that keep it from being ‘just another Mario clone.’ It had enough challenge so that it didn’t bore me, but it also didn’t frustrate me to the point of quitting. Graphics and audio are both great throwbacks to days of old, but with some fun and interesting twist.

Enough Plumbers 2 clones its way to 4 GiN Gems out of 5!