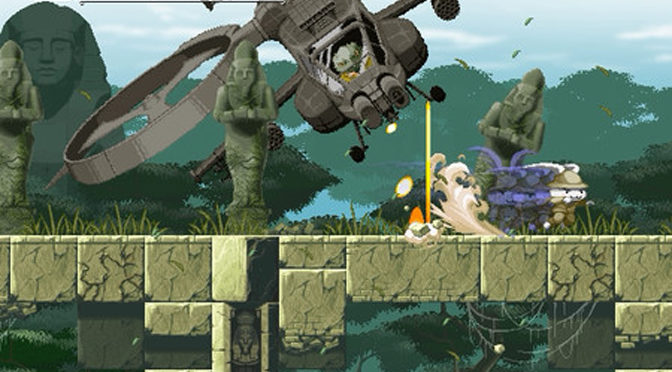 This week I’m here to talk to you all about a Metroidvania-styled game called Pharaoh Rebirth+ that launched on Steam recently.

Pharaoh Rebirth+ is a 2D adventure game that puts players in the shoes of archaeologist Jonathan. His main rival is Andre, who is a turtle, and they were cured years ago. This left Jonathan as a bunny. The two have been cursed again and now they have to race to collect ancient Egyptian artifacts before the curse kills them.

The gameplay of Pharaoh Rebirth+ will have players exploring multiple different Egyptian ruins in their search for the ancient artifacts needed to save their life. Jonathan has a strong set of abilities to help him out in his journey. This includes being able to attack and creating a shield with his ears, and many other unique traits. He doesn’t start out will all of his abilities and many will be unlocked during exploration. This can open new path for players in areas they’ve already explored, which is a standard feature of a Metroidvania game.

The controls in Pharaoh Rebirth+ are solid. Everything feels tight and reacts in just the right way. The only thing  a little off is the slight lift that Johnathan gets while jumping. It’s feels floaty in a weird way and can take a little bit to get used to. I also had a lot of problems with delayed jumps and lag when the game first came out, but these problems have since been fixed with a patch.

The graphics in Pharaoh Rebirth+  are really detailed for sprites. There’s also a lot of good animations to be found in the game, which just shows that it was a labor of love. The game is stuck at 480p, which might upset some players, but it doesn’t look too bad when set to full-screen mode. However, it can stretch a bit depending on the settings.

The music in Pharaoh Rebirth+ fits very well with its digging through ancient Egyptian ruins theme. There’s a lot of upbeat tunes to keep players’ spirits up while traveling about and it’s varied enough between levels that it keeps the audio feeling fresh. It’s also got good sound effects for attacks, gunfire and all other manner of movement.

While Pharaoh Rebirth+ doesn’t really bring anything new to the Metroidvania genre, it does what it set out to do well: create a fun experience for fans of these types of games. This, combined with its pleasing graphics and entertaining soundtrack, make it a great title for anyone looking to go on an adventure. I’d recommend it if you’re willing to part with $10 and are looking for a Metroidvania title to play and it would be a steal if you ever see it drop down to $5 during a sale.