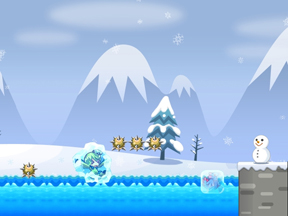 This week I played a game sent to me by my editor, John Breeden. The game was sent to me through Steam and after playing it, I’m starting to wonder if John has it out for me. The game is called Eryi’s Action, and it’s a side-scroller, sort of.

What was my first thought when playing Eryi’s Action? ‘Screw this game.’

I have a folder in my Steam library that is labeled ‘Do Not Touch.’ It isn’t often that I have to put a game in this folder and there are only four games in it at the moment. That’s going to change as soon as I’m done writing this review.

Remember a few weeks ago when I talked about how great Alien Splatter was because it was hard but not unfair? Yeah, well that doesn’t describe Eryi’s Action at all. Eryi’s Action is a side-scrolling game that takes its gameplay from titles like I Wanna Be the Guy and Cat Mario. The whole point of the game is to tick off whoever is playing it with unfair, cheap deaths. I Wanna Be the Guy could get away with it because it used various retro games for its setting and was in many ways a parody of how hard older games were, but Eryi’s Action doesn’t have any of this. To make things even worse, the game cost $5. I Wanna Be the Guy and Cat Mario are both free games, which means I don’t have to pay for something to frustrate me with those games.

Let’s talk more about the actual gameplay of Eryi’s Action rather than me just ranting. Controls in Eryi’s Action are a little loose for a game that is all about precision and dodging the unexpected deaths. The character just feels way too floaty for this type of game. Besides this, the game seems fine. Eryi has the ability to pick up and throw enemies and can also jump. There’s nothing too surprising here.

Oh yeah! The game also has a story about getting a stolen melon back from a troll, but who cares?

One thing Eryi’s Action does have going for it is graphics. The game has a nifty art style and a lot of detail has been given to the Eryi. One thing I did have a problem with was some of the death animations for Eryi. I won’t claim to know the character’s exact age, but she looks young. So when I saw her die to carnivorous plants that ripped off her clothes, I felt a little weird. No naughty bits were shown after the clothes were removed, but I couldn’t help but feel that this was a type of fan service, and that didn’t sit well with me.

The game also has an alright soundtrack. The music is enjoyable and some of the tunes were even somewhat catchy. Sound effect weren’t bad either and had the same general feel as an older game.

While there is a small niche group out there that enjoys these types of games; they aren’t for most people. Also, as I mentioned earlier, a lot of similar games are free and, frankly speaking, better than this game. This makes it really hard to justify spending $5 on Eryi’s Action.

Overall I wouldn’t recommend this game. Eryi’s Action is what I believe to be part of the problem with difficult games. Rather than offer true challenge, the game kills players with out of nowhere deaths that fuel frustration more than the desire to overcome the challenge. While the game does have nice graphics and audio, that doesn’t mean much when the gameplay itself is unenjoyable.