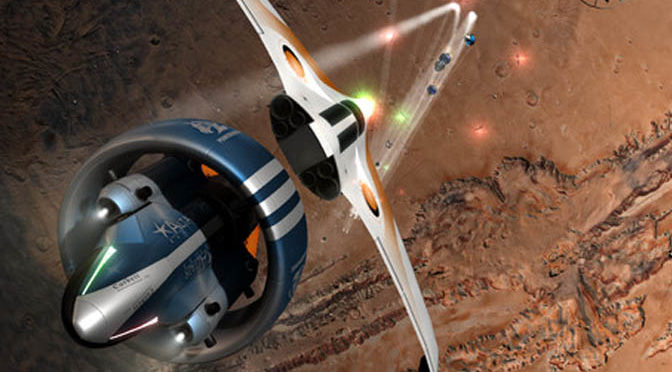 This week I’m doing something I haven’t done in quite some time; covering a demo. Yeah, the Time Waster is a place for demos and games in their early stages. I forgive you if you’ve forgotten, as it’s been so long since I last did something like this.

My demo this week is a bit of a strange one. See, the developers behind the game Orbital Racer got in contact with GiN to give us a Steam code for their demo. Sounds weird, right? A Steam code for a demo? But whatever, the point is I’ve spent some time with it this week and am ready to share my thoughts.

The Orbital Racer demo is all about racing spacecrafts through racetracks. There are two different modes that the game offers. The first is Arcade mode. As you might expect, this is a mode for the game that has a much more arcade feel to it. You don’t have to be perfect with turns, everything is a bit more fast-paced and there are weapons.

Arcade mode is fun to play, but the weapons kind of just feel tacked on. Very rarely did I ever find myself using them. Also, the game gives you an infinite number of decoys that have a chance of drawing enemy missiles. These basically take half the weapons in the game and make them an almost non-existent threat. There are still mines that players can use, but they also don’t feel all that game changing.

The second mode available to players in the Orbital Racer demo is Simulation. Just like it sounds, this mode does its best to simulate real racing in space.  This means players have to be more aware of their speed while making turns and there aren’t any weapons. Honestly, I prefer the Arcade mode, but it’s nice that both options are available.

The Orbital Racer demo includes some nice graphics for fans of the sci-fi genre. All of the ships are sleek and a heavy polish to them. They also feature a booster ring around the back, which is always a design aesthetic that I enjoy on spaceships. The environments are also a treat and do a good job of capturing the vastness of space.

When it comes to audio, the Orbital Racer demo does well. There are appropriate sound effects and it all feels spot-on. However, the game is a bit lacking in the music department, with only a couple of tunes for menus and races being silent. Seems like there needs to be some techno or electronic music to make the races feel a bit more action-packed.

Overall, I was happy with the time I spent on the Orbital Racer demo. It shows a lot of promise and is set to come out sometime this month.

As with all demo, beta, early access games, Orbital Racer doesn’t get a review score because we aren’t looking at a finished product (I guess under this logic we should probably withhold review scores from some Ubisoft and EA games as well).