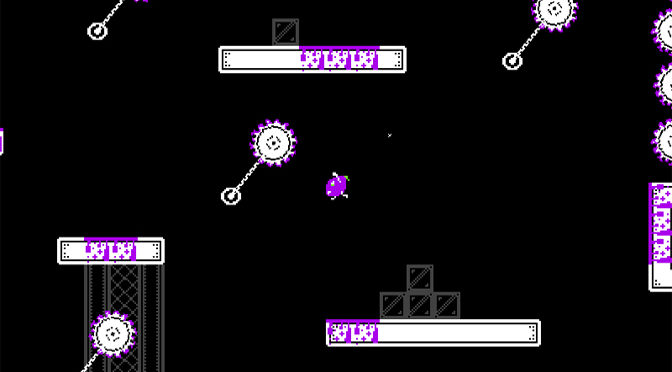 My time wasting this week brought me to the internet, as nothing on Steam or my phone was catching my interest. I tried out this snowboarding game for my phone, but just couldn’t get into it and deleted it after a few levels. Instead, I went with The Grape Escape for my time waster this week.

The Grape Escape is a platformer that has players taking on the role of Barry. Barry is a grape at a jam factory that is trying to escape with his life. As such, he has to travel through various levels filled with saw blades, conveyor belts and other obstacles that get in his way.

Barry’s controls are simple to learn. He moves with the arrow or ASDW keys, and jumps with Space. There’s also support for controllers. I tried out both routes, but I like to play platformers with a controller, so that’s the route I went.

While Barry’s skills are limited, they’re enough to get him through the challenges that he faces. The levels start out easy enough to get players into the game, but quickly ramp up in difficulty. This includes having to rely more off of momentum to make jumps, and pixel-perfect platfomring to avoid death. Plus, he can wall jump

Death is something that players will see a lot in The Grape Escape. That’s due to the game only letting the player get hit once. Yeah, this is one of those game’s that requires a perfect run to reach the end of a level. Luckily, each level acts as a checkpoint and there’s no lives to run out of. However, the game does keep track of deaths and time.

If all of this sounds incredibly familiar to you, then I’m willing to bet that Super Meat Boy is a game you have experience with. There’s no hiding the fact that The Grape Escape is a clone of Super Meat Boy. Barry controls almost exactly the same as Meat Boy. The constant dodging of saw blades is also strong a connection between the two games.

Listen, I’m not against clone games, but I feel like it only makes sense for the developer to put their own twist on the game. That just isn’t the case here. Everything about this game screams Super Meat Boy, but the graphics are just switched out for grapes instead of meat.

If I just look at The Grape Escape by itself, it isn’t a bad game at all. However, I can’t help but compare it to Super Meat Boy, and when I do that, it just doesn’t hold up. The developer says they’re working on adding more challenges for a full game that will launch on Steam later this year. If they read this, then I hope they’ll take my advice and add their own flair to the game. It’s fun, but it won’t survive out of the browser game field unless it can bring something more with it.

Overall, The Grape Escape isn’t a bad game. If you really love Super Meat Boy, then keep playing Super Meat Boy. It’s hard to recommend a game that’s just a shallow copy of another. There’s already more than enough content there to keep players entertained and the challenges are much better than what The Grape Escape can offer. Plus, a sequel to Super Meat Boy is on its way, which makes it even harder to justify playing a watered-down version.

One thought on “Noticing Similarities in The Grape Escape”