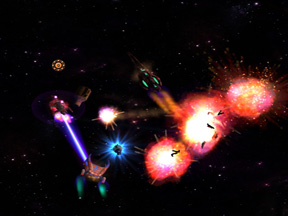 This week I’m going to talk about a game that I let sit on the backburner a little too long. Good old John sent this to me a while back and I let it fade away into my desktop (no seriously, the icon blended in almost perfectly with my background). Now though I’m going to show this game some justice.

Drox Operative is a space action RPG that puts us in the role of a gun for hire. I say this but at the same time a Drox Operative is so much more. We’ll spend our time roaming the universe, meeting new races and forging alliances. The whole idea is to have control of the galaxy, whether it is by uniting everyone in harmony or supporting one side as it crushes the other races with brute force.

This means that there is a lot of politics in Drox Operatives. Races aren’t just going to trust you out of the blue. After all we have the ability to spread propaganda or perform espionage against every race. Instead we’ll find ourselves doing a lot of missions to earn the trust of our allies. These missions vary in difficulty and can be as simple as chasing down an assassin and killing them, to being as complex as retrieving stolen technology. The different types of missions really keep the game feeling fresh.

Speaking of fresh, remember when it was the norm for RPGs to use randomly generated dungeons? Well I do and so did the creators of Drox Operative. This time though we aren’t just talking about random dungeons, were talking about random universes. That’s right folks, every time you start a new game it will be in a completely new universe than what you’ve ever played before. This is yet again a feature that keeps Drox Operative feeling fresh.

Well that and a good amount of races to play as. Drox Operative has 10 different races available for play with each race having its own pros and cons. Then after you take these races into account, you have to look at all the different upgrades available for your ship and Drox Operative really shows us just how deep it is. It isn’t hard to let the hours fly by as you adventure through space fighting off enemy ships, exploring anomalies and finding jump gates or black holes that lead to new galaxies to be explored. On the flipside though, running through space for what can feel like hours and only finding a couple of things of value will happen and I can’t help but put the game down for awhile when I have one of these uneventful runs.

The atmosphere of Drox Operative is what I was expecting from a game set in space. Low tune music plays slowly in the background and most of the sound in the game comes from either your engines running or you blasters firing. Not to say that this is all bad, it does help amplify that feeling of loneliness one would expect to feel in space.

Drox Operative does have a multiplayer feature but I didn’t have anyone to play with and the community isn’t exactly thriving, so I can’t really say much about it other than the fact that it’s there.

So as a final score, Drox Operative cruises its way to 3.5 GiN Gem out of 5!