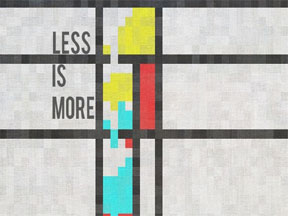 This week I’ve decided to review something that I poked around with and felt like giving an opinion on. It’s a very small game at its core, and I’ll be commenting on that a little later. But right now I’m going to go ahead and get started with the review part of this thing, so this is the game called Less is More.

At first I wasn’t sure what exactly Less is More was supposed to be. A puzzle type game yeah, but I didn’t know how that fit into the title. The connection was easy to see once I actually started the game though. In Less is More you have to remove black blocks and make three other types of blocks interact with each other. When they do, they will destroy one another.

Each of these other blocks represent a certain element: red is fire, blue is water, and yellow is sand (not the element you were expecting right?). All of these elements also behave in a rock, paper, scissors type fashion where fire burns sand, sand soaks up water and water puts out fire. And if this weren’t enough, all of these blocks behave differently, mostly in a way that the real life thing would. Water flows from where it’s contained and fills up other compartments, fire ignores gravity and floats upward, and sand falls and piles up where it lands. You’ll need to remember this too since it’s needed for beating each level.

The only other thing I can think to tell you about how this game works is that you are limited in how many black blocks you can destroy, so you’re really going to have to think about which blocks you want to get rid of and when. In the early levels you can simply blow a hole through the floor so that the blocks fall out of a level and are destroyed, but in later ones you have to rely on the other elements to destroy the number of blocks you need to in order to proceed.

And that’s really all there is to Less is More, and in terms of gameplay it worked. However the number of levels was a bit lacking. It has eight levels in all (counting the ones that are really easy and basically just tutorial), and I would have personally liked to have seen at least ten basic for something this simple, if not more. The ability for people to create their own levels does help Less is More in this area though, and it was a good decision by the creator to put it there since that means there is technically room for an unlimited amount of levels to try. So I can forgive the game here on some level for that.

As for its aesthetics, Less is More definitely kept to its theme of being minimalistic when it came to both graphics and music. In terms of graphics the simplicity of it worked, and I don’t think adding anything more complex would have added to it. The same goes for music: one looping ambient song and nothing else, and that’s all the game needed. The music piece was a good choice too, so less really was more in this case (yep, had to tie in the title somewhere).

So at the end you have a simple game that stuck to its theme and made it work, and if you’re up for playing it, go for it.