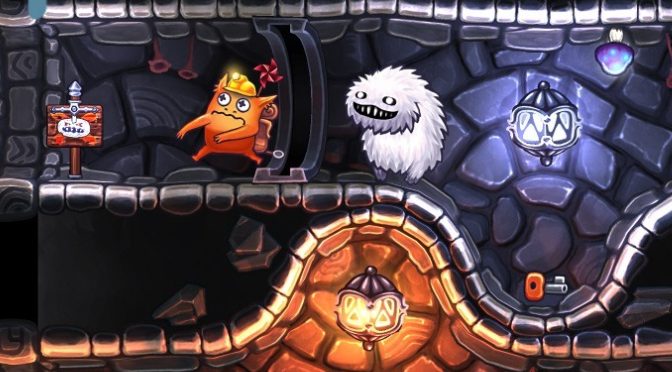 My time wasting this week is all thanks to a game called Molecats. This isn’t something I found on my own, but was rather a case where the developer reached out to us here at GiN for a review.

Molecats is a difficult game to explain without comparing it to previous games. See, the player’s goal in the game is to navigate the molecats through tunnels to reach a goal at the end. However, the player doesn’t have control over the characters. Instead, the player has other abilities that let them affect how they act. Yeah, it’s kind of like Lemmings.

The player’s abilities in Molecats include causing earthquakes, making the molecats turn around, as well as getting them to stop moving. The last two abilities are self-explanatory, but earthquakes are a little different. This ability causes the molecats to panic and run straight ahead. This provides quicker movement and also has the creatures not interact with levels and other parts of the environment. There’s also a fast forward feature, which does a lot to alleviate the boredom that comes with waiting for the molecats to get in the proper position. With these tools, it is up to the player to solve the various puzzles in the game and get the molecats to their goal.

I say solve puzzles, but honestly, none of my time with Molecats was really all that challenging. The levels in the game are each separated out into blocks and the player can often turn these blocks with the click of their mouse. Moving the characters through these blocks and to the door at the end of each level is never much of a challenge. Even when enemies are added, they don’t offer much in the way of an obstacle. Granted, it looks like this game is targeting kids, so maybe that’s why everything seems so easy to me.

Part of the reason that I think Molecats is aimed at kids has to do with its story and characters. The story is bare, with only wordless, still images to tell what is happening. It also appears that the molecats are idiots, but in a way that is trying to make them endearing. Think Minions from the Despicable Me franchise. It’s not for me, but box office numbers show that this type of humor obviously appeals to others. So maybe I’m just in the minority here.

The visuals in Molecats are solid. There’s actually a lot of care and detail put into the environments. It may not be the most outstanding looking game out there, but it is definitely a nice switch from the barrage of sprite art that the indie market strongly relies on. It kind of has a bit of a storybook feel to it, which just hammers home my assumption that the game is for kids.

Here’s the one part where I really have to voice some complaints. The audio in Molecats is downright annoying. It’s not the background music that I have a complaint with. That’s actually alright, even if it doesn’t stand out much. No, its the annoying voices of the molecats themselves. When picking up items and reaching the end of the level, the creatures will saying “oooaaahhh” and “aaaahhh” in the most annoying of tones. It reminds me a bit of E.T.’s voice, but without the charm. That’s mostly because the player hears these same two voice clips over and over again every level.

Overall, Molecats is a bit of a “meh” game. Maybe there’s some kind of magic here that will appeal more to kids, but I’m just not seeing it. I won’t say the game isn’t structurally sound, but rather I just feel like it isn’t much fun. I could get around that if there was more challenge to the levels, but that isn’t the case. Finishing off my complaints is the asking price of $13 for what should really only be a $10 game, max, and even then I think that’s a bit of a stretch.

Molecats earns 2 GiN Gems out of 5!