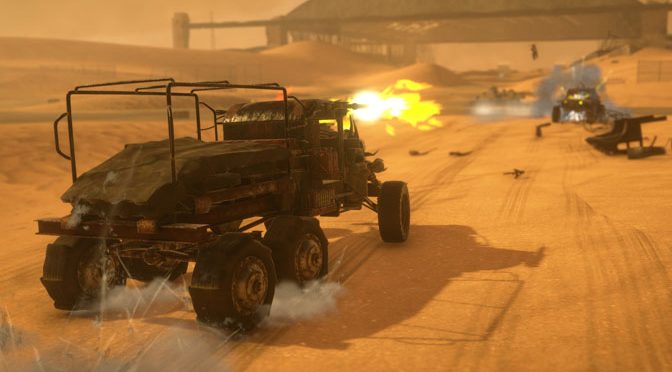 My time wasting this week was easy enough to find. See, the developers of Vroom Kaboom sent us a code for their game. The game is actually free to play, but there’s a “premium” version. However, the code I got was for the free to play version. This isn’t making much sense already, so let’s just get on with the review.

Vroom Kaboom styles itself as a tower defense game with a twist. That twist is instead of players fending off large waves of enemies from their towers, there are two players fighting each other. The waves of enemies are each sent out by the players as they attempt to take down each others’ towers.

The gameplay in Vroom Kaboom actually differs a bit from the typical tower defense game. That’s because the players are actually sending cars, motorcycles, tanks and other vehicles at each others’ towers, which are giant fuel tanks. The goal for each player is to destroy these fuel tanks for victory.

Players can’t just send vehicles at each other willy-nilly though. Instead, they have to use resource points for each car they want to send out. There are two resources in the game: oil and fire. Each car has its own resource and amount of it that it needs for players to send it off. Resources generate naturally over time, but players’ cars can also pick them up on their way to destroy the opposing fuel tanks.

Vroom Kaboom also doesn’t just let players send off the vehicles of their choosing. That’s because the game has a deck mechanic to it. Players get random cards from their decks in timed intervals. They can also take cars in their hand and recycle them for their resource value. This can provide extra resources that players can use to summon more vehicles to the battlefield. Players can also edit their decks to better suit their play styles.

Unlike most tower defense games, Vroom Kaboom actually lets the player take control of the grunts, or in this case the vehicles. This gives the player slight control to guide the cars towards the fuel tanks and around obstacles. Players can also pick up additional resources, as well as explosives that make the vehicle do more damage when it crashes.

Honestly, Vroom Kaboom has the makings of a really good game, but it loses me hard here. See, players can’t just freely control their cars. Instead, they can only adjust the lane that they are in, sort of. There’s a little movement between heading to another lane, but it isn’t much. It also feels laggy and unresponsive trying to direct the vehicles down the lanes. Why the developers went this route I do not know. It’s annoying as all get out and is a major hindrance to the game, but of course it isn’t the only problem.

I already said that Vroom Kaboom is a free-to-play game. Everyone already knows at this point that this means there is some sort of extra component that no one really wants. This time around it’s loot boxes. This is how players will earn cards for their decks and the game’s in-game currency. This isn’t really all that bad, but it isn’t for me. The game is also always pushing the player to buy the premium version.

The next major nail in Vroom Kaboom’s coffin is the community. My experience with online is that it doesn’t exist. I gave it a shot on a Friday night, thinking that this is when the most players would be on. There were three, including me. It wouldn’t surprise me if the other two were friends just playing the game together, as I never found myself able to get into a match with either of them. It’s that, or they were both playing the single-player campaign, which isn’t much more than repetitive missions against AI.

Now we have to talk about the graphics. Honestly, they look good, but I’m just gonna stop right there. It’s hard to appreciate the graphics when Vroom Kaboom is regularly dropping frames and just plain freezing up for seconds at a time before working again. It definitely puts a damper on the whole high-octane action feel the game is going for.

The audio is probably the best part of Vroom Kaboom. There’s some fitting, if not a bit generic, music to go along with the game. The real gem though is the announcer. He’s constantly shouting things out about what’s going on and commenting on the player’s actions. It’s fun and brings a lot of energy to the game. The overall style of it makes me think of Beetle Adventure Racing, which isn’t a bad thing.

Overall, Vroom Kaboom is a poor game with some interesting ideas. It isn’t the only game with these ideas through. Much of the game feels similar to Rock of Ages, but without near as much polish. Maybe check out the free version for a few matches, or if you have a friend willing to play with you, but otherwise you can just drive right past this game.