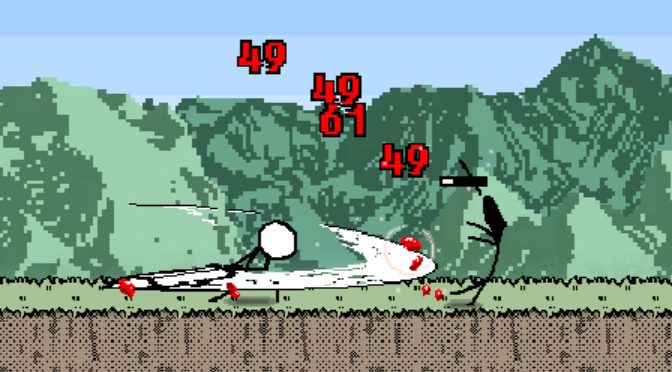 I’m going to level with you here. I almost forgot about the Time Waster this week. Alia and I are in the packing/moving process and it almost completely slipped my mind. Luckily, it didn’t and I can tell you all about the Great Sword demo.

Great Sword is a 2D platformer that has a heavy focus on its combat. The player wields, you guessed it, a giant great sword. There are a few different combos that the player can pull off with this weapon. This includes a basic combo by just pressing the attack button. However, there are also other moves that players can use while pressing direction keys as well. It’s not the deepest of systems, but this is only a demo. 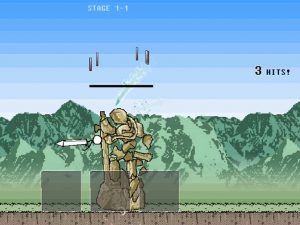 What I will say about the combat is that it feels mostly smooth. I say mostly because there is one major problem I have with it. This is the delay that occurs when trying to perform one action after another. This includes trying to jump while attacking. The character doesn’t jump immediately. Instead, they waits to finish their attack animation and then jump. Not being able to break an animation breaks what is an otherwise smooth experience.

The platforming itself in Great Sword is mostly light. There are a few areas with spikes and such that can be a drag, but they don’t show up all to often. Not in the demo at least. These areas do have the occasional problem of being overly annoying. Some platforms are set up with spikes close above them. This leaves the player easily smacking their head on them and taking damage with just a normal jump. Players can try to just walk off the edge and do a double jump to get around this, but that delay I mentioned earlier means they may still end up in a pit of spikes below them.

When it comes to the overall controls of Great Sword, they just need some work. It definitively feels like something with potential, but the developer needs to put some more polish on it. They also need to allow key rebinding. The game forces the player to use the arrow keys for movement and then splits up the other actions between the X, C, S, D, Q, W, and E keys. This makes it plain awkward to control the game. For example, there’s a dodge ability that I basically didn’t use because of this layout and the delay on inputs.

I almost forgot to mention it, but Great Sword as features a leveling system. Players collect coins and score in levels and use the resulting gold to buy more stats. This lets them increase a variety of different attribute scores to better customize their characters. It isn’t deep system by any means, but I won’t knock it either. 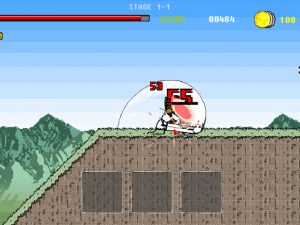 do like the visuals style that Great Sword is going for. It uses stick characters, which are always welcome here. The graphics make it look like its some world a young boy made up in his notebook when he should be paying attention in class. I know because I’ve been that young boy before. Despite the appearance, there are some problems. The biggest is probably the UI. The game allows the player three slots to carry items in. These slots show up as massive squares at the bottom of the scree. They are transparent, but still clutter up the screen more than is necessary.

I’m just going to go out on a limb here and assume the audio in Great Sword is a placeholder. Some of the sound effects are alright, but most of them have an incredibly unrefined feel to it. Maybe that’s an attempt to match the graphics, but it doesn’t quite come across that way. The music is also a bit of a bust by sounding way too generic.

Overall, Great Sword looks to be a game with a fair bit of promise. With enough care and work, I could see it getting a digital release on Steam or the Switch. The only thing is that it does need lots of work first. I don’t know how close the developer is to finishing the game, but I hope they aren’t going to leave the controls and gameplay in their current state when they do.

You know how this works by now. Demos/Betas/EarlyAccess games and everything else that fits into that category don’t get review scores.