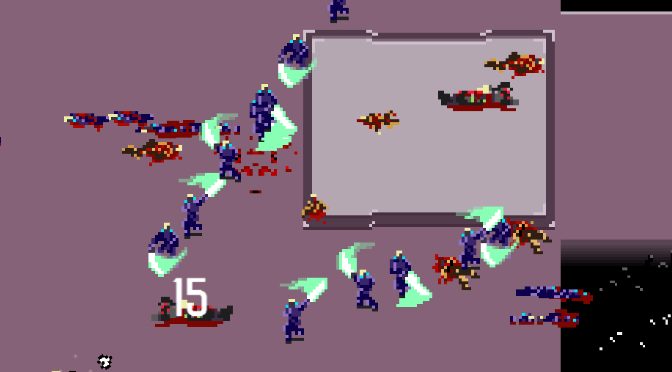 Moving really wears a person out, but at least I have good internet now. I’m still only dipping my toe into online gaming again (and I’m so bad at it), but I imagine I’ll get back into it once Alia’s computer desk comes in. She’s the bigger online gamer of us two. Either way, let’s talk about CRUSH.

CRUSH is an Early Access game that gets its inspiration from the SNES game Smash TV. At least, I always think of the SNES version because that’s what I played it on. That game is all about a futuristic TV show with a battle arena. This new game goes the same route as well. As you can guess, that means this is more arcade and less on the story. 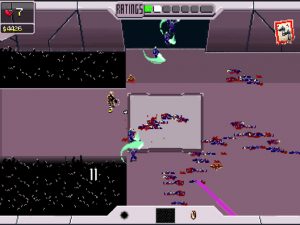 Being that CRUSH is still in Early Access, it definitely has some bugs that need worked out. However, the core gameplay here is strong. The game is a simple multi-directional shooter that has players fighting off hordes of enemies as they travel through rooms searching for a device to power a teleporter.

Once the player finds the device and reaches the teleporter, they are ready to take on a boss. Just like you would think, these are tougher enemies that will put players through the ringer. Smaller waves of normal enemies also spawn in to harass the player in these fights. I don’t know how difficult the game would be with two players, which it supports, but I found it to be plenty of challenge by myself.

To keep the game interesting, there are additional weapons and power-up that players can obtain. This includes rail guns, grenade launchers and more. One of the power-ups that I got my hands on increases player speed. This is great for getting around the waves of enemies that the game throws at you.

Graphically speaking, CRUSH looks good. It’s got that classic sprite art that makes it look like a SNES game. I wish I could rule in on the effects more, but glitches kept me from seeing most of them. This includes the majority of bullets being invisible. 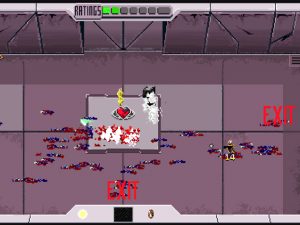 The audio in CRUSH is off to a great start. The main music that plays during the game is this heavy energetic theme that matches the game show vibe. It also includes distorted crowd cheering in the background, which amplifies the effect.

By this point everyone probably already knows my rule: I don’t spend money on games in Early Access or those being crowdfunded. I’ve got nothing against these two formats really, but I’ve been burned and don’t want to risk it again. This version of the game is also a bit too rough for me to really give it a recommendation. However, I will be more than happy to pick this game up when its full release comes around. There’s a lot of great potential here and I could see it being a blast with two players.

As always, games in Early Acces, Alpha, Beta or any other type of prelease state don’t get review scores. Instead, keep an eye on it if it seems interesting to you.