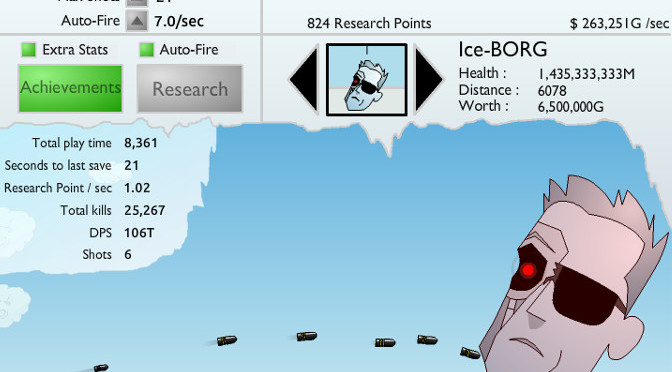 This week was fairly busy for me and I didn’t have a lot of time to dedicate to a Time Waste (I did make time to see the new Godzilla and I was disappointed by how little screen time the title creature got). Normally, I like to sit down and give a game my full attention, but I just couldn’t do that this time around.

My solution to this was to find a game that I could play while doing other stuff, and I might have found the perfect game for that, sort of. That game is Learn to Fly Idle.

Learn to Fly Idle has the player controlling a penguin that is shooting a canon at various immobile enemies to collect money and further upgrade its canon. My main reason for picking this game is because it has an autofire feature that can be upgraded to give faster attacks. This allowed me to keep multiple tabs open on my computer and take care of other work while I played (I use this term loosely) the game.

In Learn to Fly Idle, there are four main aspects of the canon that can be upgraded. The aspects are launching power, damage, number of shots and autofire speed. Players also collect research points for over time and for completing certain achievements. These points can be used to change damage, shot speed, the cost of upgrades, how fast research points are generated and distance between the canon and targets.

Players who actually try to play Learn to Fly Idle without the autofire feature are going to find themselves bored out of their minds. The game really isn’t fit to be played as something that keeps a person’s undivided attention. This makes it a pretty good example of a Time Waster. In one regard, paying full attention to this game is a waste of time, but at the same time, it’s also a good way to kill time while working.

Learn to Fly Idle can start off being muted, which makes it perfect for keeping in a separate tab or window when your boss or teacher is keeping an eye on you. The design of the game makes it really easy to just come back to it once every 10 or so minutes to buy more upgrades before tabbing back to work.

Learn to Fly Idle is also a long game. It has an achievement for playing for eight hours and it certainly can last that long. The real issue here is that the game doesn’t really leave the player with any kind of sense of accomplishment.

Learn to Fly has really simple graphics. The only thing that moves are the bullets and canon. All of the enemies don’t move and only blink red when damaged. I can’t say too much about the graphics because I didn’t pay much attention to them between moving from tab to tab. Anyone who does sit down and focus on the game will likely be disappointed by its visuals.

Audio in Learn to Fly Idle is limited to background music. There are nine different tracks to choose from and people are likely to find one they will enjoy. There aren’t any other sounds in the game. No noises for dying enemies or the canon being fired are in the game.

Overall, Learn to Fly Idle is a unique Time Waster. It isn’t a game that I can recommend just sitting down and playing, yet it’s perfect to have sitting in the background while at work or school. The gameplay isn’t really involved and there isn’t much of a sense of accomplishment for beating the game. It also has really limited graphics and audio. Outside of running it in the background, I can’t recommend Learn to Fly Idle.

2 thoughts on “How to Learn to Fly Idle”