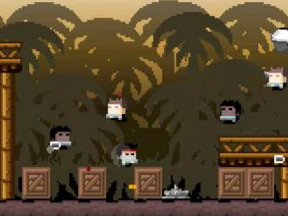 This week I was looking for something to play on the go, and while I was entertained for some time by bringing along my PSP (Yes, I’m still rocking a PSP), I felt that my phone also needed a little love. So I visited the Play Store and found a little game called Gunslugs.

Gunslugs is a side scrolling shooter that puts the player in the shoes of an action hero out to kill seemingly endless waves of enemies. There are several different characters available, including characters that look like they came out of The Matrix and Rambo. The characters don’t play any different from each other, which is a disappointment, and unfortunately they all look too similar to tell them apart during gameplay.

Characters in Gunslugs are easy to control with buttons being displayed on the phone’s screen. Players can move left and right, jump and shoot bullets. The controls are simple and easy to get the hang of, but sometimes it felt like they were a little unresponsive. This got me killed a couple of times when I should’ve lived.

The action in Gunslugs is fast paced and there is stuff going on all over the screen. This makes it so that the game never really has a dull moment. However, due to the game using a darker palette, many vital things can go unseen. A perfect example of this is the black bullets blending in with the backgrounds. This had me dying a few times from unexpected bullets or enemies. The game was also really repetitive with each level feeing the same as the ones before it.

One thing I didn’t get to try out in Gunslugs was the multiplayer. The game still has the option to enter multiplayer mode on a phone, but then says that controllers need to be hooked up to play. Trying to find a way to hook two controllers up to a single phone and then crowding around the tiny screen didn’t seem like fun to me so I passed on even trying. This feature is probably meant for PS Vita and Ouya players. Honestly, even without playing multiplayer, I can only imagine how hard it would be to keep track of what’s happening with two players on the screen.

One thing I will give Gunslugs is that it’s fair about offering the game to almost everyone. The game is available on so many different systems that it definitely helps bring in more players. Heck, even Black Berry users have a chance to play this game.

Graphics in Gunslugs are dark. The whole game is way too dark. Some of the backgrounds and environments need to be lightened up to make it easier to see what is going on in this action packed game. This would make the game much better and would have me giving it a higher score. Some levels do have a lighter background, but getting to those levels is an absolute chore due to the dark environments early game.

Overall, Gunslugs isn’t the best game out there. The game is action packed, but a dark color palette makes it difficult to tell what exactly is happening. The controls can also feel a bit unresponsive at times. The sound is also really jumbled. I’d like to believe that this game is probably better to play on a console or at least something with a bigger screen. I feel like this would solve a lot of the issues I have with it, but I don’t actually have any way to test this out. The developers are talking about bringing the game to the PC. If they do, perhaps I’ll give it a second chance.

Gunslugs falls short and gets 2 GiN Gems out of 5.