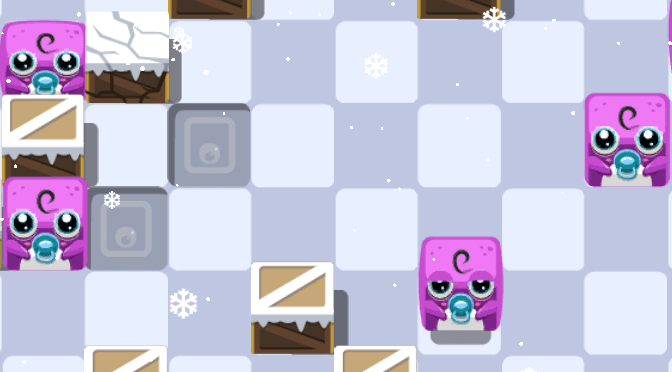 This week I spent my spare time playing Goofy Monsters on my smartphone. It’s a Sokoban style of game, and I had to go look that term up because I wasn’t familiar with it.

To put it simply, a Sokoban game is one that has the player pushing around boxes to solve a puzzle. Once pushed, the boxes will move until they collide with an object. There are certain spots on the map that the players have to move the boxes to. This type of game really requires the player to use their brain if they want to solve it.

Replace “boxes” with “monsters” and you have the gameplay of Goofy Monsters. There are a couple of slight changes, though. For example, Goofy Monsters gives players goo that they can use to stop monsters with. It’s an item that will stop a sliding monster directly on top of it. This lets players easily solve some of the more challenging puzzles they may face.

The controls in Goofy Monsters are simple. Players just have to slide their finger across the monster of their choice to move it. It is simple to do and doesn’t take much effort on the player’s part. My only complaint here is that the monsters sometimes wouldn’t move when I told them to. Normally I’d just blame my smartphone for being old and such, but I’ve been playing other games on it that require swiping motions and haven’t had any trouble.

Goofy Monsters follows the same format as most mobile games these days. Goo is something that players can only get from “free” wheel spins and buying it from the in-game store. The player also only has a certain amount of lives that they can use before having to wait for them to refill. However, players can buy more from the store. This store also allows users to purchase in-game gold with real-world money, but there’s not much of a reason to do this.

Goofy Monsters also let players watch ads to get some items. This includes extra lives and certain characters for use in the game. Different characters don’t change the gameplay and are purely a visual switch. Those free wheel spins I talked about earlier also force the player to watch a video, which I wasn’t too pleased with. I try to conserve my mobile data as much as possible and the last thing I appreciate is a video ad coming out of nowhere to suck some of it up.

The visuals in Goofy Monsters are friendly looking for sure. Bright colors fill the game and all of the monsters have incredibly huge eyes. It’ll definitely appeal to young kids, and the puzzles aren’t too tough that they can’t solve them. Each area of the game also has a checkered floor, which is super helpful for keeping track of where the monsters are. It also helps a lot when planning future moves.

The audio in Goofy Monsters is alright. There are a few different songs that players will hear when navigating the menus, level select and gameplay screens. Each of them is a nice, soft melody that matches the visuals and gameplay.

Overall, Goofy Monsters isn’t a bad way to waste some time. The puzzles are fun, there lots of them and gameplay is simple. The ads aren’t overly obtrusive to the gameplay and everything available from the in-game store is truly optional. Give it a try if it sounds like your kind of game.