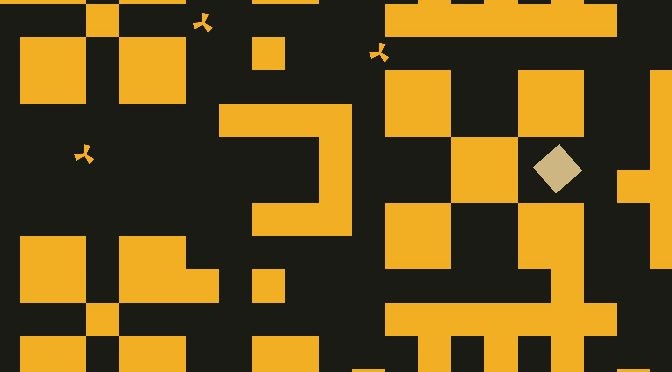 Remember FL!P last week? Well I’m back again this week with a similar browser game. The game I spent my time with this last week is Trial And Terror.

Trial And Terror is a puzzle game that requires players to make their way through a variety of hazards to reach the end of the level. However, it’s a little more fast paced than FL!P was. That’s because these hazards can kill the player and send them back to a checkpoint, or event the start of the stage.

Just like with last week’s Time Waster, Trial And Terror only allows the players to move in four different directions. The player also can’t halt their movement, but rather has to wait until they hit a wall to stop. I really enjoy puzzle games set up like this, so checking out this type of game two weeks in a row is no bother to me.

Trial And Terror requires a bit of speed on the player’s part as well. There are lots of obstacles that will require expert timing to get through. Even then, players may have to immediately make decisions about where to go next based on where the hazards are. It makes the game a bit more reactionary at times, but this isn’t a bad thing.

Trial And Terror has 40 levels for players to go through. Due to how the difficulty spikes up and down between these levels, players may find themselves spending more time on this game that they would expect. It’s honestly a little jarring dealing with such difficult levels, only to have an easy one show up out of nowhere. Just doesn’t quite mesh well, ya know?

Selecting levels is actually a bit of a task in and of itself. The game will normally just move players on to the next level. However, there is a level select screen. The problem is that the screen doesn’t display all of the levels and instead requires the player to scroll through them. Unfortunately, the scroll speed is about as slow as it can get and the levels are in rows of three. It’s a small issue that the developer will have to work on fixing in any possible games they put out in the future.

Trial And Terror is a minimalist game at heart. The levels are mad up of solid colors, as is the block that we control. The colors of the levels change as the player progresses and so does the color of the block. It’s a small issue because the block is always the same color as the walls in a level. This makes it easy for the block to blend in with the environment, which isn’t a good thing.

The audio in Trial And Terror is about as basic as it gets. There’s a single song that plays throughout the entirety of the game. It isn’t a bad song, but it doesn’t stand out either. There also aren’t any sound effects in the game at all, which leaves the audio feeling a bit bland.

Overall, Trial And Terror is a solid first game from a new developer. It’s not great by any means, but it isn’t a bad way to waste some time, either. Go ahead and check it out if it seems like the kind of game you enjoy.