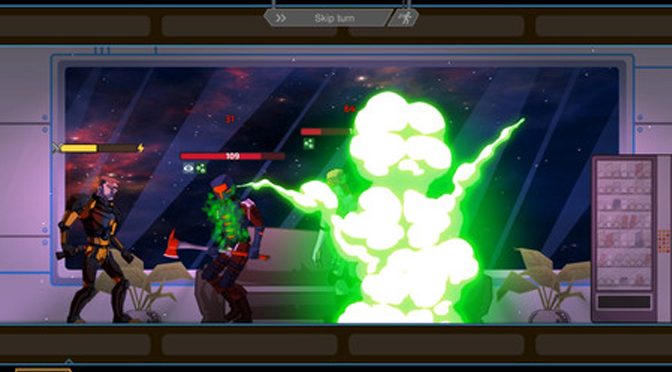 I’ve been mixing up my time wasting the last few weeks, and I continue that trend again this week. Instead, of some small browser game, I’m looking at Hazardous Space: a full game release on PC. I say that, but then I have to mention that this game looks like something I would play in my browser. Funny, isn’t it?

Hazardous Space is a rogue-like game that puts players in the role of former space marine Max Carnage (I’m not making this up, btw), as he fights off hoards of the undead on the “Wanderer” space station. He also has his two other crew mates with him, but I can’t remember their names to save my life.

The story in Hazardous Space really doesn’t matter all that much. It’s kind of tongue-in-cheek already with names like Max Carnage for its characters, but actually tries to take itself incredibly seriously. This just comes off as a lack in focus from the developers for what kind of atmosphere they wanted in the game.

The other characters in Hazardous Space also don’t shut up. It’s not that they are actually voiced, but rather that they are constantly chatting via dialogue boxes in the upper-left-hand corner of the screen. It’s a bit distracting because I want to move forward in the game, but also feel like I should be reading what they are saying. The problem here is that they really do just go on and on. If I was to just pay attention to them, I wouldn’t be able to actually progress in the game.

The final nail in the story coffin for Hazardous Space is the translation. On top of the loads of text in the game, much of it is poorly translated. I’m all for seeing what developers of different backgrounds can do, but please don’t skimp out when you hire a translator. It’s an easy way to make a game look bad by having poor sentence structure and typos right out of the gate.

Let’s actually get into the meat of Hazardous Space’s gameplay. As I said already, this game is a rogue-like. It will challenge players to travel through somewhat randomly generated areas collecting loot and other items. The goal is to survive each chapter until the end. Doing so lets the player progress to the next chapter. However, if the player fails, some items carry over to the next run. They can also unlock perks that will make additional playthroughs easier.

The main focus of Hazardous Space is managing resources. The player has both energy and health to keep track of. Moving, attack and taking basically any action requires energy. If the player runs out of energy, they start losing health instead. Energy is also how players level up their stats. This all comes together for a neat enough system, but I think it’s a bit lost on this game.

Here’s the thing, Hazardous Space is kinda boring. The levels all look about the same, as do the various enemies. Sure, each room is random, but its still the same five different rooms with the same five different enemy types in them. There’s also a crafting system in the game, but random loot drops were more than enough during my time playing, so I basically ignored it.

The combat in Hazardous Space is also a bit of a bummer. The game goes for a turn-based system. Alright! I love turn-based games! Unfortunately, the system is incredibly shallow. Managing AP for attacks, player health and where to attack enemies for maximum damage all sounds like it should make it more entertaining. Instead, it’s the most bare-bones setups from each of these ideas. This means that combat just isn’t deep enough to really engage the player. The lack of enemy types also doesn’t help, either.

The worst thing about Hazardous Space has to be the lack of a save system. The game only records progress between chapters, which can take about an hour to complete. That means all progress is lost if the player has to quit playing in the middle of a chapter. Even worse, it means the player loses all progress if the game crashes. You’ll never guess what happened to me during my first time playing the game, will you? (Hint: It crashed.)

The graphics in Hazardous Space are another part of the game that are a bit off. I don’t actually mind the 2D art style, but the animations are stiff as a board. This may be showing my age some, but I was strongly reminded of AdventureQuest (a browser game from 2002) when seeing them. Some of the story parts of the game also feature still scenes of art. I don’t want to criticize these too much, but there are obvious cases where the artist lacks a basic understanding of proportions. This results in arms appearing somewhat noodle-like in some images.

The audio in Hazardous Space is solid enough. There’s not much that really sticks out about it though. It’s got the right music to match the more serious atmosphere of the gameplay and the sound effects are okay. Nothing great, but nothing bad either.

Overall, Hazardous Space has some interesting ideas, but it isn’t really worth the time to check out. The save problems alone make it worth skipping, which just makes all the other issues the icing on the stay-away cake.