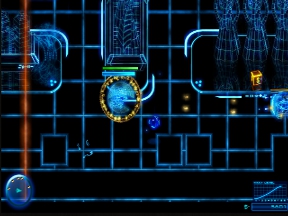 When a mech based game catches my eye of course I’m going to look it over and see if it’s any good. It’s been a while since I’ve found a game where piloting a big machine in battle has actually lived up to my hopes. GARE however, has managed to spark my interest. Not as fast paced as I initially expected, GARE still managed to hold my attention and let me relax a bit as I went on mission after mission to fight the enemy.

At first I wasn’t sure what to expect when I saw that the entire game was basically nothing but a wireframe render. It made me think of Tron with its blue and black world with brighter blue or orange things to pick up, and the game does hold true to a more cyber or computer feel. I was surprised when I saw how detailed the levels were for being a bunch of thin blue lines, but I also found myself worried about getting lost in it. Unfortunately, that fear inevitably came to light. However, it wasn’t as bad as I thought it was going to be. Sure you sometimes can’t tell what you can shoot or walk through, but when that happens it doesn’t really affect the gameplay all that much since you always have another direction you can go in. You also get used to the world quick enough that you don’t have to worry about not knowing where you can and can’t go (most of the time).

The game mechanics were thankfully easy to understand and even easier to get the hang of: ASWD to move, click the mouse to shoot. The game also implemented the use of a special ability depending on which leg parts you attached to your mech. Personally, I just stuck with the Absorb Shots shield, but there was also a Reflect Shots and Slows Down Time extra. As you progress, you can buy more, higher grade equipment as well as unlock bombs. As if being surrounded by enemies isn’t enough, you just hit space to add ten more explosions to the mix.

There is also a side collection quest that I recommend doing as you play through the game (you’re already going to explore almost every inch of the level anyway, so it won’t hurt to do this). In each level there are three stars, and by collecting these three stars you unlock and upgrade a little bot that floats beside you named Tikky. Each time you collect three stars, Tikky gets upgraded and more powerful, eventually becoming able to attack, shield, and regenerate your bombs.

Overall the game is well polished and fun to play. The difficulty curve is well balanced, and the game is neither too easy nor too difficult. The music, in my opinion, is a little wanting, but at least what’s there fits the game mood. The main thing I’m concerned about is how much fun I had playing it, and when I’m forced to strategize a bit and be more careful lest the play style I used in the last level gets me killed, then I’m all for it.

GARE battles its way to 4 GiN Gems out of 5!