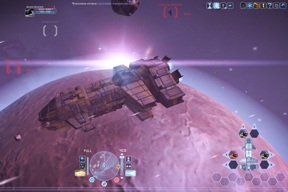 So who here loves themselves some Battlestar Galctica? Huh, you love that show? I find myself playing a game about a television series that I never watched. Now don’t go hating on me, I do love Sci-fi but this was just a show I never found the time to watch. Maybe that will change though now that I’m going to play the game.

And it’s free to play, so there is really no reason for someone not to click on the little red button above and give it a try!

So the very first thing you’ll be doing is choosing which side you want to play for. We have the Cylons and the Colonials. I decided to play as a Cylon for a few different reasons.

First of all you must remember that this is an MMO and the most important thing in an MMO is leveling. Cylons get a 50% boost to experience for the first 10 days of play. At first I wondered why they got the boost but after entering the game I soon realized why.

The other reasons that I wanted to play as a Cylon were really just simple and didn’t have much in the way of thought behind them. Cylons are represented by red and red just so happens to be my favorite color, easy peasy.

Also I could either be a weak human made of flesh or I could be an awesome robot made of metal. For those who may not have guessed it from reading my past reviews or Time Wasters, I love Transformers and anything else mecha or robot based. So it wasn’t exactly hard to see why I chose the Cylons.

Plus, I thought it would be kind of cool to be the "bad guys."

Alright, it’s time to move onto the core of Battlestar Galactica Online, the gameplay. Well for starters you’re in space, yeah I know "no duh." From here you’ll be able to pilot around the galaxy searching for materials to harvest from old ship wrecks, or to board your side’s main ship for that galaxy.

The main ship acts like a hub for that galaxy, and is basically your HQ. You use it to get missions, upgrade or buy new ships, and to talk to other players and NPC’s.

Controls for the ships are fairly simple. So simple I sometimes play with my feet if I’m trying to eat and play at the same time. Don’t make that face at me. I’m sure you’ve done something similar before, right?

Push the spacebar to use your thrust and the arrow keys to change direction. It takes a little bit of getting use to if only because of the weirdness of controls in space.

The key to making this easier is to remember one thing, everything is relative. If you’re flying at the enemy and you find yourself upside down in comparison to them, don’t take the time to try and adjust yourself. It doesn’t matter so just go for them like you normally would. When playing with friends using terms like left or right aren’t going to help describe your situation. Instead learn to give directions based off the star in the system.

For example don’t say "the enemy is to my left" instead say that the enemy is "starward" (all cosmic respect to anyone else who knows what sci-fi novel this term comes from).

Now we move onto the most impressive part of Battlestar Galactica Online, that’s right, it’s the graphics. I was expecting some shoddy attempt at 3D graphics when I first loaded the game up. I mean it is a browser game after all. What I was treated to was a big surprise. Full 3D (no not those cheesy jump out at you 3D) graphics that looked amazing. We’re talking the equivalent of PS2 graphics in your web browser! Due to my lazy and uncaring nature, I tried to ram one of the enemy ships. Instead of hitting it and blowing into thousands of pieces though, I found myself passing right through it! One side note though is that it’s fun to cut your thrust at the right time so you can hide "inside" the enemy ship.

So overall I’ve enjoyed my experience with Battlestar Galactica Online, so much so that I may be hitting up Netflix to watch it in the near future. I just have to decide if I should start with the original 1970s series or the modern one from the sci-fi channel, which I hear is one of the best series for sci-fi ever created.

That is if I can find time to pull myself away from all these time wasters. Geez, I even procrastinate at stuff I want to do, oh well.

Battlestar Galactica Online earns itself 4 GiN Gems out of 5!