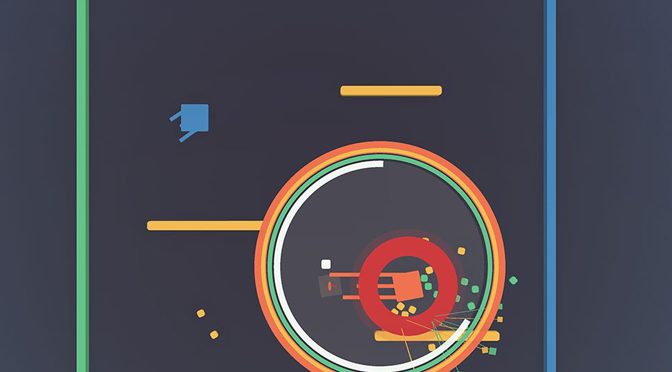 My time wasting this week was of the mobile variety, but it wasn’t with my smartphone. Instead, my gaming needs were satisfied by my Nintendo Switch and a game called Flat Heroes.

Flat Heroes is an interesting game. It’s basically a platformer. However, it challenges the player with surviving challenges in single room, rather than moving forward. The catch here is that this room changes for each level. There are 15 levels per world, including a boss fight at the end, and 10 worlds in the game. That’s 150 levels, as well as a survival mode for those looking to test their skills further.

The gameplay of Flat Heroes is simple. The game throws shots, enemies and various other obstacles at the player. The player can move and jump. There’s also an air dash that can go in any direction. Other abilities are also unlocked as the player progresses through the game.

Constantly going through challenges may seem like a bore at times, but Flat Heroes makes sure to keep it interesting. Each world has its own little gimmick. The game always eases the player into this change, but is full-on challenging them by the end of the world. This makes for a nice difficulty curve that increases and decreases appropriately for each world.

As the player progresses in Flat Heroes, they’ll find that the game is much more open to hitting them with even more difficult challenges. This includes introducing multiple concepts from earlier worlds at the same time. This goes a long way toward keeping the game challenging while never feeling unfair. Sometimes the challenges even feel a bit more like puzzles that the player must solve. This makes it so that players will need a nice mix of quick thinking and reflexes to make it through some of the later levels.

Flat Heroes also supports multi-player, but it wasn’t something I got to check out. Despite this, I’m sure the game would be plenty of fun to enjoy via couch coop with some friends. It lets up to four players comes together to take on its challenges, which can also stretch out the replayability of the game.

The visuals in Flat Heroes are also great. The game uses simple graphics, but it has its own style. There are also plenty of special effects that spice the game up, but never to the point of distraction. The color themes of the game changes for each world as well, which keeps it looking fresh. This game definitely serves as an example of minimalism done right.

The audio in Flat Heroes is also solid. The game uses fast-beat tunes to keep the player in the moment. They also mesh well with the rest of the game. This includes the sound effects, which are also great.

Overall, Flat Heroes is a great way to waste some time. The game is $10, which is on the high end of the $5 to $10 range that I was expecting. That doesn’t mean that I’m saying it is overpriced, but I also wouldn’t blame anyone that wants to wait for a sale. Either way, check it out if it seems like something that fits your gaming preferences.