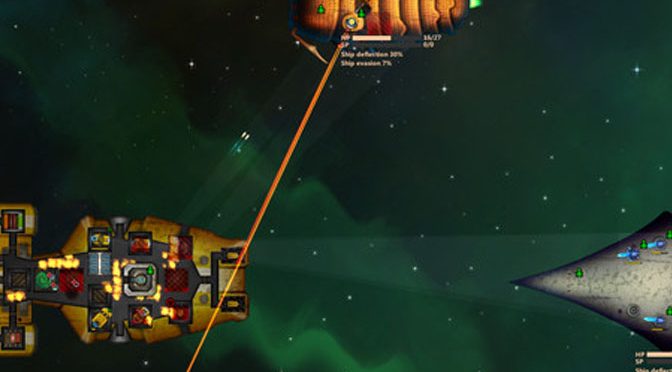 You know the drill by now. I’m checking out a game in Early Access. So this is more of a preview for the game than a review. The subject this week is Shortest Trip to Earth.

Shortest Trip to Earth is a spaceship simulation game that puts players in the role of a crew stranded in space after an accident. They have to try and make their way back to Earth after spending five years in cryo sleep. Unfortunately for them, that trip isn’t as easy as the game’s titles suggests.

Shortest Trip to Earth challenges players to traverse several solar systems in an effort to make the journey back to Earth. However, players will have to be careful about managing the supplies on their ships. This includes keeping track of food, fuel, power consumption and lots more.

At this point in time, I’m sure that there are more than a few readers that are thinking of Faster Than Light (FTL). I’ve never actually played the game, but even I can see the comparisons. The only similar game I’ve ever played is another one that was in Early Access called Pixel Starships. My lack of experience in this very niche genre means I can’t get into the nitty-gritty details about the differences. What I can talk about is what Shortest Trip to Earth offers to players in its Early Access stage.

At its heart, Shortest Trip to Earth is a rogue-like. That means that players can expect lots of death and RNG as they attempt to make their way back to Earth. The game isn’t complete, but it does currently give players five sectors to explore. These sectors are randomized, but each one has its own vibe. This seems to mostly be about what factions and lifeforms are present in the areas.

To give an example, the first sector is ruled back a faction of alien rats. They are a greedy race and the player can typically buy and bribe their way through the sector. The next sector is completely different. The aliens here are much more hostile. It includes space pirates and races that simply want battle.

To be honest, I’ve only been to the first two sectors in Shortest Trip to Earth. Once a player unlocks a sector, they can chose to start from it the next time around. Even with that benefit, it can be hard to get through a single sector. Since I’m already being honest here, I’ll go so far as to say that Shortest Trip to Earth relies just a little too much on luck and needs some additional balancing.

A good example of the balance issues include the enemy AI. It makes combat into a death sentence four times out of five. That’s because the enemies typically have nukes. These can bypass shields, do massive damage and have a large area of effect. Enemies will almost always start off battle with a nuke, crippling the player’s ship and, more often than not, killing them.

This all isn’t to say that battles in Shortest Trip to Earth aren’t beatable. I’ve had a few battles go my way. Sometimes these wins have me taking little damage, but other times my ship is crippled to the point that a game over is basically guaranteed.

Shortest Trip to Earth does do one thing in particular that makes these deaths not sting as much. During a player’s journey they collect Fate Points. The player can’t use these points during that playthrough. Instead, they can use them to buy advantages for the next run. Most of these advantages are only good for a single run, but there are some that are permanent buffs. The game also pushes players to spend all their Fate Points every go, as they don’t accumulate over playthroughs.

Shortest Trip to Earth also benefits from have a nice collection of random events for players to run into while playing the game. This includes unique encounters with different races, as well as varying situations from planet to planet. None of them ever take too long to complete, which helps keep the game going. It makes for nice pacing, but I won’t deny that some of the situations will repeat after a few runs through a sector.

Shortest Trip to Earth is also sporting some 2D art for its graphics. They’re a bit rough, but they do enough to show what is going on. The user interface also doesn’t take up much room, but does feel a little clunky to navigate at times. Like placing parts on the ship, for example. Players have to first open their cargo, left click on the part and the right click on the place they want to put it. It just feels unnatural as I try and grab the part and drag it to the place I want it, but it doesn’t work.

Shortest Trip to Earth does have audio, but there isn’t much. Less than stellar sound effects fill the game and the music is lacking. In all fairness, this is an Early Access game. The developers have plenty of time to change this before the final release.

Overall, Shortest Trip to Earth is a nifty little game. It lacks polish, but that is synonymous with Early Access. It’s gameplay seems solid enough and the rest is easily passable. The biggest barrier to entry though has to be its price point. The developers are asking $20 for the game. I hate to be the one to break it to them, but it just isn’t worth that. I don’t know if it would be even in a hypothetical finished state. Especially not when options like Faster Than Light only cost $10.