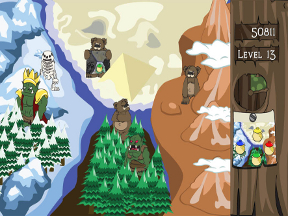 So during my free time (which I find to be shrinking more and more lately) I played Frozax Game’s "Don’t Feed the Trolls". Anyone who keeps up on their internet memes knows exactly what this means. For those who don’t here is a brief overview: Trolls are those who purposefully try to anger someone else by disagreeing in the most ridiculous way possible. This leads the person that is being targeted by the troll angry and they respond with immense amounts of rage giving the troll what they wanted or "feeding" them. Now that we have that down let’s take a look at the game.

Well, about as much of a look at the game as we can anyway. Don’t Feed the Trolls isn’t exactly what I would call much of a game. In fact, it hits the bare minimum.

Gameplay consists of hitting either the X, B, A, or Y buttons whenever a bear pops up in the corresponding location on screen, but wait there’s more! Every so often a troll will pop up instead of a bear. Now here comes the tricky part…don’t feed the troll. Yeah, I know, I never would have guessed it either. The game tries to mix things up further into the game by adding different types of bears and trolls but overall it just feels weak.

Graphics and sound aren’t much better. Generic bear and slap sounds can only go so far and the whack-a-mole style animation for trolls and bears popping out of the bushes isn’t exactly anything to write home about.

This is one of those cases where a company is trying to cash in on a popular internet reference with minimal effort. The lack of care is obvious by the sad gameplay, graphics and sounds that make up the game.

Here is a challenge for you Frozax Games: I want to see a fun and addictive Indie game get released by you. You created Spring Up Harmony, which wasn’t the best game because you missed that addictive factor that is sometimes hard to bottle. On the other hand Spring Up Harmony was a beautiful game that really had a lot going for it. I was really hoping to be impressed this time around. Just to let you know I really do think you guys/girls have enough talent to make interesting and fun Indie games. Please try to do this instead of just creating cheap games that are supposed to sell by name alone like you’ve done with Don’t Feed the Trolls.

Overall I can’t say there is much going for Don’t Feed the Trolls. I can only find it in my heart to give it 1.5 GiN gems out of 5 (and that’s with my generosity kicking in).