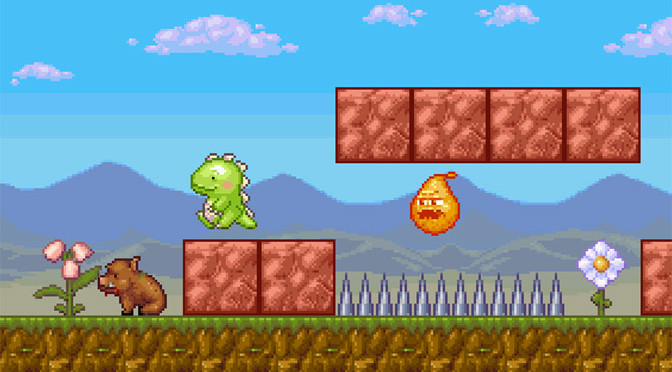 This week I’m switching it up and turning to my smartphone for my gaming needs. What I’ve got for you all this week is a game called Dinofour.

Dinofour is a platforming game that has a lot of different puzzles for players to solve. The game features four different dinosaurs that each have a special ability that will be essential to solving certain puzzles.

The first of the dinosaurs is green. It’s strong and can push blocks that the other three can’t. The second dino is red and it can shoot fireballs that melt ice and kill enemies. The third is purple and it has the ability to switch its own gravity. The final dino is blue and it can fly for a short distance.

When I started out with Dinofour I thought it was going to be a super simple game that I would breeze through no problem. I was wrong. The first few levels are fairly easy, but after that the player is treated to many difficult challenges that will require multiple attempts to complete.

Just when you think you’ve got Dinofour all figured out, something new comes up. Later levels will start adding in extra elements, such as teleporters and treadmills, that make solving puzzles more difficult. These new aspects of levels are introduced over time and it really helps keep the player interested in the game.

There’s also a lot of levels for players to enjoy in Dinofour. There’s over 70 different ones to complete and it’ll take some time to get through all of them. However, each level can be completed in about 30 seconds if everything is done right. Some stretch a little longer and others are shorter, but 30 seconds is about right.

Having levels that only last for this long makes Dinofour very easy to pick up and play for short periods and put down without worrying about losing progress. This is essential for an enjoyable mobile game in my mind. It’s one of the main reasons I don’t buy larger games for my smartphone. I picked up Sonic 2 a while back and could never find the time to get a groove going before I had to stop.

You know what else really helps Dinofour? It has simple controls that respond well. The controls show up onscreen and they include arrows for moving left and right, a jump button and a second button for the dinos’ special abilities. These controls are tight and work really well for the game. It also helps that Dinofour isn’t very fast paced.

Dinofour is a little different than many of the other mobile games that I’ve reviewed. It’s a game that you actually have to pay for. I typically spend my time on my smartphone with free-to-play games. As I said above, I never feel like dedicating too much time to a mobile game in a single sitting. However, the short levels and simple, but challenging gameplay of Dinofour works really well.

Dinofour has some really kiddy-looking graphics. This is actually what caused me to believe it would be a walk in the park. They’re cute and they definitely work for the game. Just don’t let them trick you into thinking its a game just for kids.

The audio in Dinofour is really simple. There’s only a few music tracks in the game, but they’re very catchy and fun to listen to. Sound effects also match up well with the tone of the game.

Overall, Dinofour is a really solid game. It’s got cute graphics and audio to draw in the kids, but enough challenge to keep adults busy as well. It also clearly understands that it’s a mobile game and takes advantage of short, but interesting levels.

Dinofour earns 4 GiN Gems out of 5!