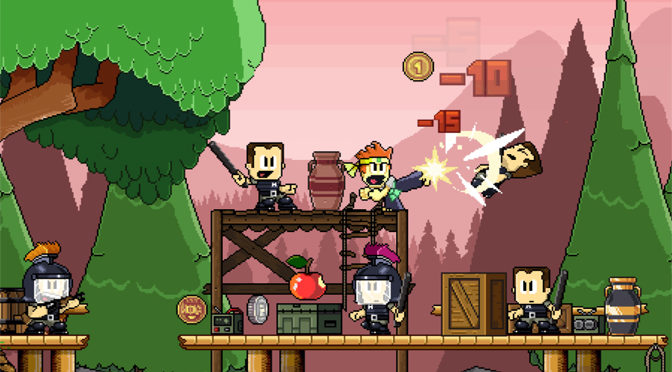 My time wasting this week continues to take place on my smartphone and along the way I ran into a game called Dan the Man: Action Platformer. It looked neat enough, so I went ahead and gave it a chance.

Dan the Man: Action Platformer is exactly as the name implies. The game is about a guy named Dan that fights his way through enemies while traversing a 2D world. There are platforms to jump on and secret areas to find as well.

The story of Dan the Man connects to a web series that I’m unfamiliar with. However, I do know (maybe) that there’s a King with evil troops, a clan of ninjas that act as the resistance and lots of villagers that really just don’t want caught up in the whole mess. The main game is running through the story mode, but there are other options.

The core gameplay in Dan the Man: Action Platformer is the fighting. The game plays like a classic beat ’em up with combos and various other types of attacks. There are also ranged weapons for players to use. This includes guns, shuriken and throwing knives. Combining all of these techniques is easy enough, but there are some challenges in the game.

Dan the Man: Action Platformer features new events every week for players to take part in. Completing these events unlocks chests with rewards. There is also a large chest with a special reward available every week. To unlock this chest, players will have to complete all of the daily challenges. There are five challenges a week and players are allowed to go back and complete ones from previous days.

My main concern going into Dan the Man: Action Platformer was the controls. I’m not a fan of using touchscreens, which is one of the major reason that smartphone gaming doesn’t appeal much to me. Luckily, the virtual buttons in the game are responsive and make it easy to play this game.

The visuals in Dan the Man: Action Platformer are pixel art and it fits well with the gameplay. The choice also looks nice on a smartphone and doesn’t have the game taking up major resources. It also just plainly has a lot of charm to it. Not sure that’s something that you can rate objectively, but it is worth mentioning.

The audio in Dan the Man: Action Platformer matches the visuals. It also has lots of upbeat music that feels right at home with an action game. The sound effects are also solid and I enjoy the squeaky voices of all the characters in the game.

If Dan the Man: Action Platformer has one flaw, it would be the video ads. Complete a level? Video ad. Reach a save point? Video ad. Want to keep playing? Video ad. Some of these can be skipped, but there’s still so many of them in the game. Granted, there is a premium  version that removes ads and there already aren’t banner ads anywhere, but it still feels like a bit much.

Overall, Dan the Man: Action Platformer is a fun game to kill some time with. It’s good enough to jump on for a few minutes a day and doesn’t require much more time than this. I’ll be keeping this one on my smartphone for at least a few weeks, but I don’t think I’ll be completing all the daily events.

Dan the Man: Action Platformer earns 4 GiN Gems out of 5!