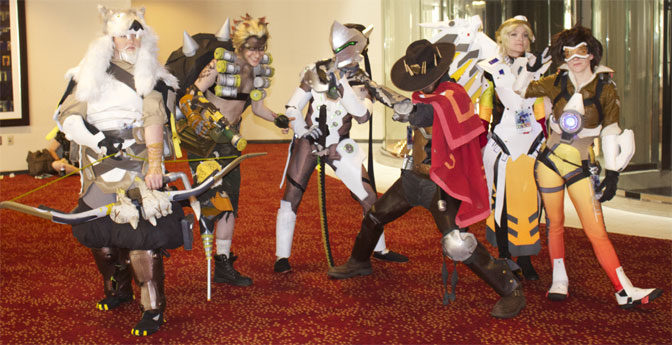 This year, preparation for DragonCon began a little earlier than usual. My traditional ritual for con prep usually involves identifying speakers I want to hear, panels I want to attend, and artists whose work I’d like to peruse, and I get to it about a week before the convention.

However, this year, I started nearly two months before departure because this year, Robert and I were going to have costumes. As most of my readers know, I’ve been covering DragonCon for more than half a decade, and I try to do something a little different each time I go. With a convention as varied and as large as DragonCon, that’s been surprisingly easy to do, but this year, I opted for something a little different. Every year, Robert and I find ourselves surrounded by folks in tremendously creative costumes, ranging from the exquisitely crafted to the hilariously clever to a mix of the two, and every year, we promise ourselves that we’re going to do something for the following year’s convention that somehow we never get around to doing it. This year, I resolved to change that.

I dusted off my sewing machine, purchased a Simplicity pattern (No. 4450), and set to work. Being in a mixed Star Trek/Star Wars marriage, we opted for one of funny mash-up costumes, so I opted to make Jedi robes in Starfleet colors. Now, I had never done anything more exciting than assembling a tote bag unsupervised before, and I really had no experience assembling a garment, reading a pattern, or estimating the amount of fabric I’d need. However, I refused to let that lack of practical knowledge stop me and thus dragged our small family into a whirlwind of questions such as “You spent how much on fabric?” and “Oh, GOD, how did that pin get over THERE?” All told, I spent three weeks ironing, pinning, seaming, and fitting in addition to a near-obsessive search for the appropriate accessories. For what it’s worth, I can recommend Quantum Mechanix (https://qmxonline.com/collections/star-trek) for communicator badges, but finding screen accurate rank pips drove me nearly bonkers. I’m also fairly certain that my five-month-old kitten can now meow curse-words phonetically, having heard so many of them as I managed to pin myself to the fabric.

All of that effort, I expected. What I did not anticipate was how creating the costume built up excitement for the convention. This revelation is hardly news to anyone who has ever done costume crafting, but for me, it was revelatory to participate in this part of fandom. I don’t know that I’ve ever been quite as excited to get to DragonCon as I was this year, and Robert mirrored that enthusiasm. We discussed which day we wanted to wear our costumes, how best to pack them, whether we wanted cloaks. It was fantastic.

When we got there, I don’t know that we necessarily overshadowed anyone. Cosplay at DragonCon is a serious business, and this year’s cosplay offerings were really quite fantastic. A few folks stopped Robert to tell him that his costume was cool. My camera Sherpa had opted to try out life as a Jedi Red Shirt for the day, and we even had a few pictures taken of and with us. Had you explained to me a month prior that such small indicia of appreciation would have made my con, I would not have believed you, but the other real revelation was that we were now part of someone else’s convention experience. In a way, we became content generators, sharing in the experience with other attendees, and it enhanced our own experience of DragonCon enough that we’re already plotting what we want to do next year. Fortunately, pattern 4450 has a cloak that looks to be something I can adapt for use as a White Mage costume.

Editor’s Note: Check out our full feature, showing as much of the great cosplay as we could find!