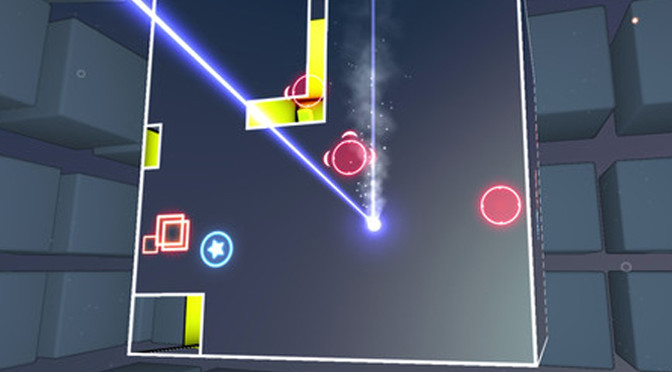 Let’s talk about about Cubixx HD! PlayStation 3 owners might already be familiar with this game since it’s been out since 2011, but it was only recently released on Steam in January.

Cubixx HD is a puzzle game that’s all about cutting out sides of a cube to clear levels. Each level will have a certain percentage of the cube that needs to be cut out in order to claim victory.

Cutting parts out of sides of cubes starts out easy enough with only basic enemies called Cubixx roaming around. The enemies can’t be killed and also determine what part of the cube stays after a complete cut is made. The game introduces new enemies the further in players get and this adds a good bit of challenge to it.

Cubixx HD also starts introducing power ups in later levels. There are good and bad power ups. Good ones help the player and give them some bonus points. Bad power ups help the enemies and offer more points than the good ones. These power ups are collected by cutting out the part of the cube that they are located on.

Cubixx HD features 50 different levels that are split into sections. Playing through these levels unlocks additional challenges, such as a Time Attack mode, Score Attack and more. There’s also a multiplayer features that lets seven people play against each other and leader boards to track scores.

The controls in Cubixx HD are simple and easy to get the hang of. Players move their icon around with the arrow keys and can move around the white edges on the cube. Holding Enter activates the laser and this allows them to move onto the different sides of cubes. More points are offered for keeping a single line going across different sides and there are also bonuses that can be earned for completing certain tasks.

The visuals in Cubixx HD are really great. The game just looks so good and its got a great sense of promoting speed and action through its visuals. It also helps that there are complex objects inside of cubes. This makes it really easy to determine what has and hasn’t been cut when compared to the simple appearance of the cubes’ sides.

The audio in Cubixx HD matches up well with its visuals. It’s got some great electronic beats going on during gameplay and all of the sound effects are nice. There also aren’t any balancing issues with one part of the audio drowning out the other.

Overall, Cubixx HD is a really great game. I’d never heard of it before since I skipped out on the PS3 and I’m glad it made its way to Steam. It also won’t break the bank with its $9 price tag. Anyone that’s interest in this game should check it out since it has a 35% discount until Feb. 12.