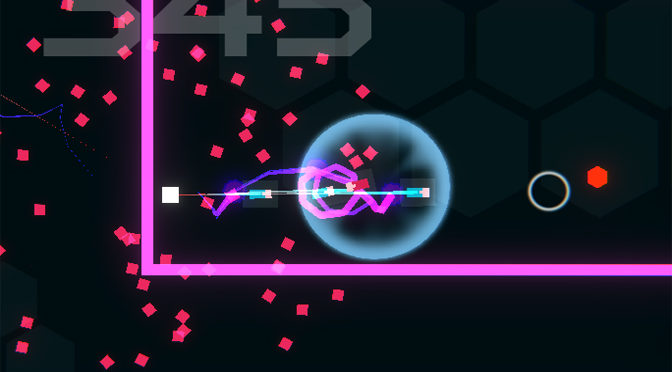 This week my time wasting brought me back to browsers games for the first time in a few weeks. While searching for the perfect game to pass the time with, I found Cubito Mayhem.

Cubito Mayhem is a twin-stick shooter that challenges the player with defeating as many enemies as they can in an unending horde. As such, there’s not story to be found in the game, but what it does bring is a wonderful twist to the genre.

The main mechanic that makes Cubito Mayhem stand out from other twin-stick shooters is bullet blocking. Enemies will fire shots at the player, and they can then block them with their own shots. This causes the player to build up Bullet Power. Once the Bullet Power bar fills all the way, the player’s shot will get an upgrade. The bar then drains and the player has to fill it again for another upgrade. The more upgrades that the player has, the more difficult it becomes to fill the bar.

Filling the Bullet Power bar also has a secondary benefit. Doing so will restore one health to the player. The game starts you out with four hit points and every hit takes one of these away. If players can manage to avoid shots while maintaining all of their health, they will still get an extra hit point, pushing them above their starting health.

The whole bullet blocking mechanic in Cubito Mayhem works really well. It rewards the player for actively intercepting shots, rather than just avoiding them. However, it a player does let a shot get a little too close, there’s a sprint button that they can use for a hasty escape.

As with all endless horde games, Cubito Mayhem continues to throw more powerful enemies at the player the longer they survive. You will eventually die, but not before trying to surpass your previous high score. Unfortunately, the game doesn’t feature any kind of leader board for high-scores, so it doesn’t really matter all that much.

Cubito Mayhem opts to go with a simplistic look. The player is a small blue square and the game takes place on a black background. All colors in the game are neon, which helps bullets and enemies stick out. The visual change in shots after an upgrade is also rewarding on its own.

The audio in Cubito Mayhem is solid. It’s only a single electronic song, but it fits well with the neon colors and fast pace of the game. The sound effects also have a fittingly retro feel to them.

Overall, Cubito Mayhem is a good way to waste some time. The bullet blocking mechanic is interesting and the game does a good job at rewarding players for doing well. Check it out if you’ve got a few minutes to kill.