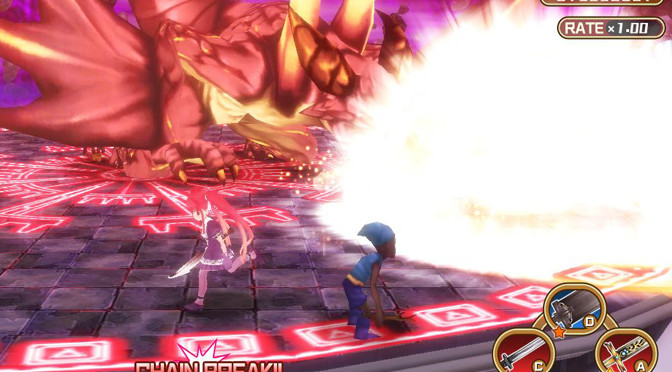 This week I sat down and played an upgraded version of a Time Waster that I’ve previously reviewed. This game is Croixleur Sigma. The original version of this game was just called Croixleur and it had a lot of problems. My review for it can be read here.

Starting out, I want to talk about Croixleur Sigma’s story. The basic idea behind the game is that you play as two girls that are in an academy for sword sorceresses. The girls come from two different sororities in the school and are looking to beat each other out in an effort to become the valedictorian.

The story mode of Croixleur Sigma is short. Players are given 15 minutes to climb to the top of a tower while fighting enemies. Each girl has their own story and after beating the game in under a certain time with each of them an epilogue is unlocked. This epilogue is also timed at 15 minutes. This makes for a really short and generic story that can be completed in under an hour with cutscenes included.

Gameplay in Croixleur Sigma is basically a stripped down version of Devil May Cry. The man story has players climbing a tower  where each level is filled with enemies. This is very similar to DMC’s Bloody Palace mode.

My first time reviewing Croixleur was hurt by the game not letting me use a gamepad. The hack and slash controls aren’t really suited for a keyboard and the only thing I could use a gamepad for was adjusting the camera. Sigma fixes this and it makes the game much more enoyable than what it was.

Players can choose to play as either Lucrezia or Francesca. Both of the girls have a basic three hit combo and can dash. They can also attack in air. Climbing the tower also unlocks new weapons for both Luc and Fran. Each of these weapons gives the character a different special move. Players can bring up to four different weapons into battle. This allows for some decent customization of combos and play style. However, the basic three combo attack is really limiting and I wish there were ways to expand it for more depth in combat.

There are a few different modes that players can choose from when they start up Croixleur Sigma. I’ve already mentioned story mode and there are also time attack, survival and challenge modes. The time attack and survival modes are alright for killing time, but the real meat comes from the challenge mode. Challenge mode starts out with 10 different mission, but as more modes are beat, more challenges are unlocked. There are 30 total challenges to complete and this adds an extra hour or two, depending on how skilled the player is, to the game.

Croixleur Sigma also allows two people to play the game together. However, this is only available for local play. I love sitting down next to a friend to play games as much as the next person, but this isn’t always possible. No online play really limits when I can play the game with people.

One of my major issues with Croixleur Sigma is its length. As I’ve noted, the story is short. Unfortunately, the other modes in the game don’t add a lot of time either. The average player is probably only going to get three to four hours out of the game. This is a very short time for an $8 game. I could understand paying it if the combat was deeper and there were more challenges, but as it is, I can’t see it being worth it.

The graphics in Croixleur Sigma are alright. I’d even say they’re a step above the average indie release. This doesn’t mean they were perfect.

One issue I had with the game was the reuse of old enemies with new color palettes. There aren’t many enemies in the game the way it is and it could have really benefited from different models over different colors.

Another issue I had with Croixleur Sigma is its use of suggestive subjects (such as the girls taking a “bath” together) with characters that don’t even look like adults. I’m not foreign to Japanese media or the strange themes in it. Most of my favorite games come from Japan and there are more than a few anime box sets sitting on my movie shelf. However, this doesn’t mean that I will ever accept the notion that it’s alright to sexualize young girls (or boys) in video games.

The audio in Croixleur Sigma isn’t bad either. The game is fully voiced in Japanese and has text in English. Like I said above, I watch a lot of anime and I’m use to having to read subtitles. This doesn’t bother me, but if it’s being released in English speaking countries then it should include English voice acting for those who like to understand what they are hearing. This is especially true while in battle with both characters. Fran and Luc will talk to each other while fighting, but it’s all in Japanese and there aren’t any subtitles for these conversations.

Overall, I’ve enjoyed my time with Croixleur Sigma. The game isn’t bad, but there are a lot of problems with it. Sigma is a huge upgrade from Croixleur, but it still falls short in terms of length. The combat in the game is alright, but anyone looking for something deep should pick up a copy of the DMC HD Collection instead. The lack of English voice acting is also an issue and the sexualization of young girls didn’t sit well with me. The game is alright for killing some time with, but I wouldn’t pick it up unless it was on sale.

Croixleur Sigma fights its way to 3 GiN Gems out of 5!