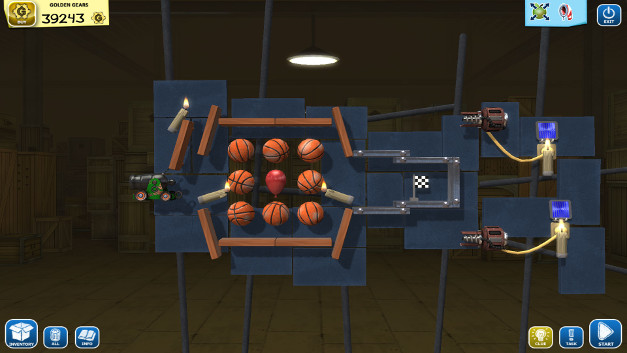 This week I didn’t have to look around for a Time Waster. Instead, John sent me a review copy of Crazy Machines: Golden Gears. I’ve never played any of the Crazy Machines games prior to this, but I know others here at GiN have enjoyed them.

For those already thinking it; Yes, GiN has reviewed Crazy Machines: Golden Gears in the past. This release of Golden Gears came out for iOS and Android devices last year and our reviewer gave it 4 GiN Gems. 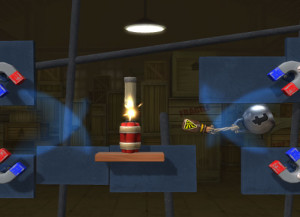 Being new to the Crazy Machines series means that I’m not going to be able to make comparisons to the previous games. Instead, I’ll be looking at the series with a fresh perspective.

Crazy Machines: Golden Gears is a puzzle game that has players completing Rube Goldberg machines to make certain actions happen. These puzzles include getting objects from one point to another, destroying all of a certain object and more. I found most of the puzzles in the game to be challenging, but not in ways that they were frustrating to solve.

Solving puzzles in Crazy Machines: Golden Gears awards players with, well, golden gears. These are used to unlock additional levels, but the game also says that it gives players enough gears to unlock all the levels and then some.  Only thing I can figure is that the golden gears are left over from the iOS and Android versions of the game and that they were used for additional in-game purchases. They don’t harm or help the game either way and can really just be ignored.

I understand that the game is called Crazy Machines: Golden Gears, but I couldn’t help getting annoyed when I was penalized for completing levels in the simplest way. On one hand, the game rewards players for complex solutions to problems, but on the other hand, it also rewards players for using less parts. This is a contradiction that makes it really hard to figure out what the game is wanting from its players.

One redeeming quality of Crazy Machines: Golden Gears is the ability to create levels for other people to play. This also adds to the game’s value as additional levels made by other players can be downloaded and played. 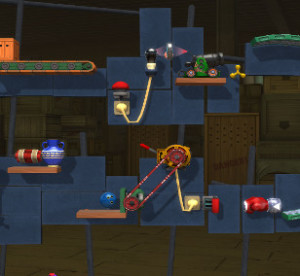 Graphics in Crazy Machines: Golden Gears are alright. There aren’t amazing CGI cutscenes or anything like that, but the game doesn’t need them. There are particle effects for things like steam from a kettle and other small touches, but nothing over the top.

Audio in Crazy Machines: Golden Gears is pretty standard. The music in enjoyable to listen to, but it won’t be anything that sticks in your head days after playing the game. Sound effects are also good and nothing seems off about them. There is also very minute amounts of voice acting in the game. It’s not bad, but there is so little of it that it doesn’t really matter.

Overall, I really enjoyed Crazy Machines: Golden Gears. The game has really fun puzzles to solve and they are definitely challenging. Having to solve some of the puzzles in ridiculous ways can be annoying at times and the game doesn’t always make it clear how it wants the puzzle solved. The game also has some solid audio and graphics, but neither of them is going to blow you away.