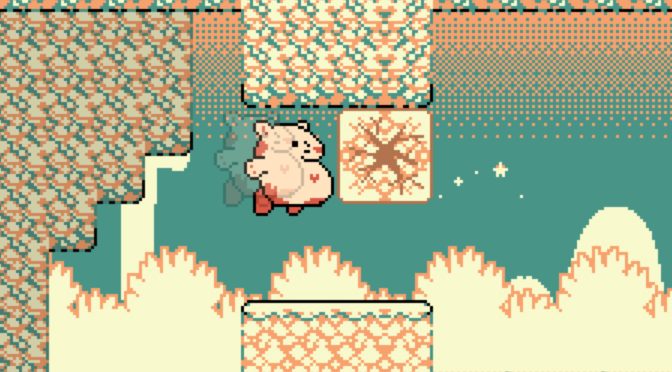 My time wasting this week was originally going to be a bit more in-depth, but I never got around to checking out my original game. Yeah, the guy that writes the Time Waster procrastinated this week. Big surprise, right? Instead, I spent my time with Cheddar Panic NG: Super De-Lite, which I’m just going to call Cheddar Panic from now on.

Cheddar Panic is a platformer that celebrates Pixel Day. It hearkens back to the Game Boy Color era with its gameplay. This has players controlling a large hamster named Cheddar as he travels through a few different levels.

Cheddar Panic takes its inspiration from a few different Game Boy Color games. This includes Kirby and the Wario Land series. The main influence on the world, enemies and art style seems to be Kriby, but the gameplay is all about Wario Land.

Cheddar has a few moves in his arsenal. This includes the ability to jump, dash, ground pound and do a belly bash. Like I already said, this feels incredibly close to how Wario controls in the Wario Land series. That’s awesome because those are great games (Especially Wario Land III).

There are only a few levels to go through in Cheddar Panic and no boss fights to speak of. It’s a little disappointing, but I’m still happy with what the game offers. It does have a few hiccups (Never ground pound the flan. Just don’t do it, man.), but they aren’t enough to ruin the experience.

The game’s graphics are truly great. It does a wonderful job at holding to the limited color palette that was available on the Game Boy Color. Despite this, it still looks solid. It’s evident that a lot of care went into this game. That includes some small details in the animations, such as kicking up dust while moving, that other games lack.

The audio in Cheddar Panic is another bonus for the game. It has a nice retro feel to it. The music is also incredibly catchy. Add in the synthwave-sounding remix for the end credits and its a big plus for the game. The sound effects are also well done and match up with the Game Boy Color theme.

Overall, Cheddar Panic is a great way to waste some time. The game isn’t too long, but it does offer a simple platforming experience that is worth checking out. The audio alone is worth it for me and serves as a great icing on top of the cake.