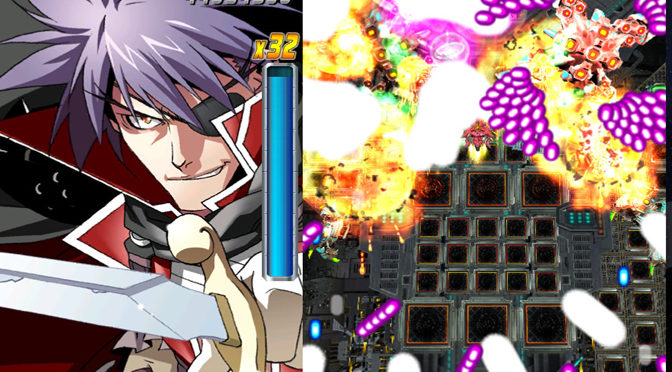 I’ve been spending my time recently playing a shump called Bullet Soul. I was provided with a review copy of the game by the developers and have been giving it my attention on and off for the last few weeks.

This version of Bullet Soul is available on Steam. The game has come out before for the Xbox 360, but I don’t have any experience with that version. However, fans of the original release will be happy to know that the Steam version includes all of the game’s DLC, as well as a few extra goodies.

I enjoy a good shump and it has been a little while since my last go at one. Luckily for me, Bullet Soul was a great way to jump back into the genre and there is a lot of content to check out.

Bullet Soul features three different ships for the player to chose from. Each of these ships have their own play style and fans are sure to find one that is their favorite. The story doesn’t really change much when choosing to play as a different ship, but this is okay. Honestly, there really isn’t much story to the game and what is there is in Japanese. Just know that there are bad guys and a group of pilots willing to take them out.

Once players have had their fill of Bullet Soul’s main campaign, they can take on its other modes. The game has a stage select mode that allows players to challenge a single stage to see how high of a score they can get. There is also a time attack mode that has the player trying to earn as many points as possible in a limited amount of time. Scores from each of the different modes are sent off to leaderboards so that players can compare how well they did with their friends, and other players around the world.

At first, I thought this was where Bullet Storm’s content came to an end. If it had, I’d of been okay with it, but there’s actually more game here. Moving over on the menu will allow players to access “Version B” of the game. This adds new enemies, patterns, bosses and secrets to the main game. There is also an additional ship in this mode and it is way too powerful, but still a joy to play with.

Bullet Soul has a unique feature to it that I really enjoy. When the player kills an enemy, any shots fired by that enemy will turn into a harmless smoke. This may seem a bit strange for a shump, but I found it to be a great feature. It promotes a more aggressive play style than typical bullet hells have and it was refreshing. This also pushes the player to go for a high score more naturally and makes it so that there is an added advantage for doing so.

There’s another feature in Bullet Soul that will be great for players that are just starting out with shumps. This feature has the game automatically activating their screen-clearing bomb when they would take a hit. This is how I, and I assume, most other people that play shumps use their bombs. The feature is optional, which means that veteran shump fans can chose to activate bombs on their own if they chose.

The visuals in Bullet Soul are great. The action looks good and it is very easy to keep track of where the ship is on screen. Also, running through clouds from bullets of enemies that have been defeated causes them to break apart, which was a nice touch. The character designs are also solid and the developers have made sure that the game looks great on modern displays.

The audio in Bullet Soul is also a treat. Energetic rock music plays throughout the different stages as players blast through hordes of enemies. The only problem I had starting out was how loud the characters yell when activities bombs and such. Luckily, you can adjust the volume in the options. Also, I could’ve done with some subtitles for the couple of cut scenes in the game when the characters are talking.

Overall, Bullet Soul is a good way to waste some time. The game is fast and fun to play. It also has a couple of unique features that make it stand out from other shumps out there and I enjoy the focus on an aggressive play style. The visuals and audio are also solid and add to the great gameplay. However, I will warn that shump veterans are likely to find it a bit of an easy adventure.