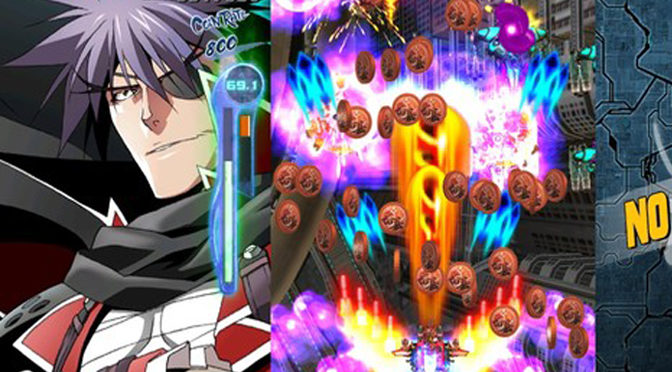 I imagine that some of you are seeing this and thinking “Hasn’t he already reviewed Bullet Soul Infinite Burst?” Truthfully, you wouldn’t be far off from the truth. I reviewed the original Bullet Soul back in April. This is an enhanced version of that game. To help us all out a bit, I suggest going back and reading the original review for Bullet Soul to best understand this one.

You’re back? Good. So Bullet Soul Infinite Burst contains all the different modes that are present in the original game. It also lets players use the extra fourth character in any of the modes. However, it does change up some things by adding an extra version called Burst mode.

Burst mode is where the meat of Bullet Soul Infinite Burst is. The game takes the original stages and enemies from the first game and remixes them. This includes new patterns, more health and different types of shots. It all makes for a game that is much more difficult than its predecessors. I welcome this, as the original Bullet Soul is a bit easy.

The other big feature of Bullet Soul Infinite Burst is the Burst ability in game. Instead of having bombs to use in combat, players now have Burst. It starts out empty, but fills up as players collect coins from enemies they have taken down. Burst is basically a super mode that will last until the Burst gauge runs out. Players can also collect coins to refill this gauge and keep Burst going longer.

Moving away from bombs to Burst means that Bullet Soul Infinite Burst also changes up how death works. Rather than just dying from a single hit, players now have a health bar. This allows them to take about three hits before death. The health bar is also refillable with special drops from enemies. Also, players aren’t invincible while using Burst. This might take a little bit to get the hang of as special attacks and bombs typically make the player invincible in most bullet hell games, including the normal version of Bullet Soul.

The graphics in Bullet Soul Infinite Burst are mostly the same as the original. The new areas that players will run into look great and don’t feel out of place with the rest of the game. One change to note is that there are no longer puffs of smoke from bullets that disappear after a ship’s destruction. That may seem disappointing, but it’s a good change. Those puffs of smoke and the constant supply of coins being on screen at the same time would have made it difficult to tell what was going on.

Bullet Soul Infinite Burst features the original’s music rearranged for Burst mode. It’s still speed metal and fits well with the game. The original soundtrack is still present in this version, as well. Characters also still yell incredibly loud and do so even more when picking up coins while in Burst mode. It can be a bit annoying, but volume controls for this are present in the options menu.

Overall, Bullet Soul Infinite Burst is infinitely superior to the original Bullet Soul. It features just about all of the same content as the original game, and then some. My only real complaint here is that it makes the original game useless. Both of them are on Steam for $15 (I was provided codes for both versions of the game), but there’s no reason to buy the first version. Shump fans may also feel slightly cheated by the better version coming out just a few months after the original, and I can’t really blame them.

If you haven’t bought Bullet Soul yet, then go ahead and grab Infinite Burst. If you already own the original, I would suggest waiting for a sale before picking up this newer version. It is the better game, but it doesn’t warrant another $15 if you already own the first one.